G.I. Joe: A Real American Hero – Season 1.1 will be released on July 21st, from the pop culture mavens at The Shout! Factory. The four disc set will mark the label’s first release related to the cult animated series. With three miniseries and a bunch of standalone episodes, the show holds up extremely well for me as an adult. The level of kinetic action, weaponry and vehicles, still holds my attention, and made for enjoyable, if not serious, viewing. 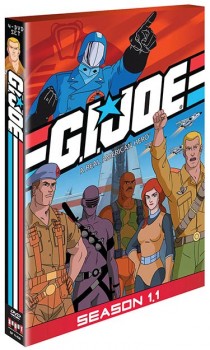 The first miniseries, The M.A.S.S. Device, features Cobra dreaming up their latest plot to take over the world. To that end, Destro develops a device for Cobra Commander that can transport soldiers, weapons and supplies from one location to another. Called ‘The M.A.S.S. Device’, the machine requires three rare materials to fully function: radioactive crystals found only in the Antarctic, metallic shavings from a meteor inside of a volcano, and heavy water from the world’s deepest ocean trench. To prevent Cobra from gathering the materials they require, the Joe team must get to the various locations around the globe first, to secure the remaining elements.

The story devices and general plot structure remain the same in many of the episodes and mini-series, but they’re all so much fun to watch, you basically ignore the mechanical nature of the productions, instead focusing on the exciting action, worldwide locations and hilariously over-developed weaponry.

M.A.S.S. Device and the second miniseries, The Revenge of Cobra, aired in 1983 and ’84. Then the official G.I. Joe animated series started in 1985, with Pyramid of Darkness, which amped up the action to sometimes dizzying and zany levels. The ‘Pyramid’ is a plan by Cobra and the Crimson Twins to control the world by using a hijacked satellite to connect four massive energy cubes placed at specific locations around the world, to create a blanket of darkness, under which, all electricity fails. And so goes the the series. Made for true fans of the franchise, and fans of classic animation.

Bonus Material
Extras material is featured on all four discs, with a nicely designed printed brochure, listing the order of the material, as well as all of the episodes. The first three discs each contain one part of the featurette Looking Back With Ron Friedman, with each segment running seven minutes. Friedman discusses his experience writing episodes for the show, along with his motivation and inspirations.

The fourth disc contains a PSA series entitled Knowing is Half the Battle, which are basically safety tips for kids, featuring segments on things like how to evacuate from a burning house. Also featured on the disc are three of the original G.I. Joe toy commercials, a printable PDF script for the episode “Jungle Trap” and a 1963 G.I. Joe Toy Fair presentation.

Also featured within the boxed set, is a collectible sheet of temporary tattoos.

Season 1.1 acts as a nice primer to that mega-release, for fans to get a chance to see the quality and workmanship inherent in Shout! revival releases. Soon after G.I. Joe: A Real American Hero: Season 1.1 is released, Shout! Factory will be unleashing a 17 disc complete series set in limited edition foot locker packaging.

Season 1.1 contains 22 episodes on four discs, including the seminal three five-part miniseries that acted as the genesis for the animated aspect of the franchise.