On August 11th, the raucous, hard-hitting British thriller that knocked out critics and festival judges, London to Brighton, comes to DVD from E1 Entertainment. To celebrate the release, FilmFetish is giving away three copies of the DVD for readers to enjoy.

PLEASE NOTE: To be considered to win this and all future contests, your eNews profile must be updated with your current mailing address. CLICK HERE for further details and instructions on how update your existing profile, if necessary. Only eNews subscribers are eligible for contest prizes.

I’ll be running this contest through the release date of August 11th.

More about London to Brighton
In the vein of Lock, Stock and Two Smoking Barrels and RocknRolla comes this raucous, hard-hitting British thriller that knocked out critics and festival judges. 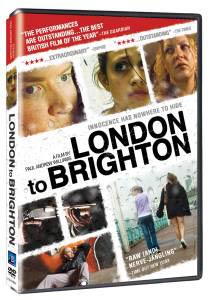 After taking the 2006 international film festival circuit by storm, and a hop across the pond for a 2008 U.S. theatrical run, the critically-acclaimed british thriller London to Brighton will at last be released stateside on dvd this summer. Writer/director Paul Andrew Williams took home two prestigious directorial awards for his feature film debut – an exhilarating race against time through Britain’s ruthless underworld. London to Brighton stars Lorraine Stanley (Eden Lake, Cass) in a role that earned her a London Critics Circle nomination for best actress of the year, as well as Johnny Harris (RocknRolla, Atonement) and Claudie Blakley (Severence, Pride and Prejudice).

Kelly, a desperate prostitute, is bullied by her pimp into finding an underage girl for a sadistic mobster. She discovers joanne, an 11-year-old runaway, who naively complies. But when the pedophile turns violent, Kelly intervenes and everything goes horribly wrong in this must-see for fans of british crime thrillers in the vein of Lock, Stock and Two Smoking Barrels and RocknRolla. The London to Brighton DVD also features bonus programming including deleted scenes and alternate ending, behind the scenes footage, and audio commentary with director williams. In addition, the DVD features english subtitles.