With the advent of the reality show and record short attention spans, TV producers are hiring top talent to create a higher calibre of drama. Burn Notice is one of that new crop of shows benefiting from this effort. Burn Notice is an inventive television spy series, that combines hilarious, biting dialogue with colorful action. Season Two continues the misadventures of well-worn Michael Westen (Jeffrey Donovan), a highly trained, altruistic superspy, who’s out to find the person responsible for issuing his “burn notice” – an order that effectively discredited him in the intelligence community, at the same time stranding him in the city of Miami (I wouldn’t mind getting one of those notices). Friends are scarce, however Michael has managed to reconnect with two loyal counterintelligence experts, themselves outcasts in the espionage world – former lover and ex-IRA operative Fiona Glenanne (Gabrielle Anwar), and easygoing “Company” retiree and FBI informant Sam Axe (cult film hero Bruce Campbell). 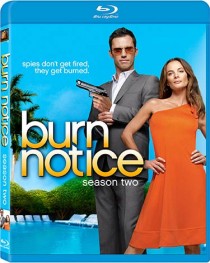 With Michael’s assets now frozen, the trio take on side jobs A-Team style, assisting clients who’ve been conned, threatened, or otherwise hurt by Miami’s resident drug dealers, hitmen and gang lords. Relying on every trick and tool in his limited arsenal, Michael fights to protect innocent victims and find out who betrayed him at the same time.

Over the course of Season Two, the stakes are raised, with more dangerous enemies and interesting twists in the main story arcs. They not only have to outsmart the Russian mafia and face down a crafty CIA agent named Carla, they have to protect Michael’s mom (Sharon Gless) and brother (Seth Petersen) from danger, capture a master thief, outwit a dangerous assassin and figure out who’s been behind them all. By the time Burn Notice’s second season comes to its bloody end, Michael’s life is left more upside down than ever and will have you wondering what series creator Matt Nix has in store for us next season.

Bonus Material
The Burn Notice: Season Two Blu-ray contains the same set of special features available on the DVD. The highlight of the group are the audio commentaries, which feature vibrant discussion from the show’s cast and crew. Bad Blood includes a brisk talk with series creator Matt Nix, director Ben Watkins, writer Rashad Raisani, and various guest stars including Method Man and Bronwen Hughes. Double Booked is an informative overview with Nix and director Tim Matheson, among other crew. Lesser Evil includes an amusing discussion with co-star Bruce Campbell and supporting actor Michael Shanks, who talk about the show’s direction. NIXin’ It Up features the show’s creator discussing the production of the episode Do No Harm, which he directed.

Also included in the set are 12 deleted scenes, which were cut from various episodes, including Truth and Reconciliation, Breaking and Entering and Double Booked, among others. They are spread out across all three discs. Boom Notice is a parody of the show in which a burned boom operator tries to help an actor out of a jam. Much funnier is Gag Reel, which includes a group of botched lines, missed cues and production screw-ups.