On May 5, 2009, E1 Entertainment will release the cult classic series Gigantor, including 26 episodes of the classic animated series, in their original air-date order, plus fascinating bonus features, issues 1-6 of the Gigantor Comic, and a 16 page collectible booklet, all in a Deluxe 4-DVD Set.

To celebrate the release, FilmFetish is getting one complete set for a very lucky reader to enjoy. In order to be entered in the random drawing for a FREE copy of the 4-DVD set, here’s what you need to do:

I’ll be running this contest through the DVD release date of May 5th, 2009. Good luck!

More about this release
Never fear, the great Gigantor returns this spring to save the world from evil criminals, enemy robots and hostile aliens. The influential cartoon series about a giant heroic robot and the young boy that controls him blazed a new trail for Japanese animation in America. Long unavailable on home video, E1 Entertainment presents the classic cartoon in a newly packaged 4-DVD collection of 26 uncut episodes in their original air-date order, with bonus interviews and commentary, six complete Gigantor comics on DVD-ROM, and a brand new collectible 16-page booklet. 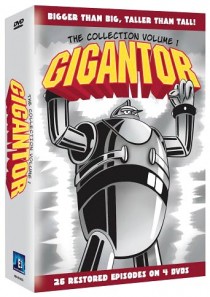 In the “future” year of 2000, young Jimmy Sparks has control of a virtually indestructible flying robot built by his father. Gigantor was originally designed as a weapon, but has been reprogrammed as the ultimate guardian of peace. With the help of Dr. Bob Brilliant, secret agent Dick Strong, and Inspector Blooper, Jimmy and Gigantor must battle to save the world from a never-ending assault by ruthless villains.

Gigantor began as the brainchild of Japanese cartoonist Mitsuteru Yokoyama (Giant Robo, Sally the Witch) who released 92 anime episodes in Japan in the mid ‘60s as Tetsujin 28-go. The series was soon acquired for broadcast in the United States, adapted for U.S. audiences by producer Fred Ladd (creator of Pinocchio in Outer Space, The Big World of Little Adam), and aired for two seasons (52 episodes) starting in 1966. Gigantor: The Collection – Voume 1 features the first 26 of these uncut, black and white episodes, digitally transferred from the original 16mm film.

Enlightening extras include an in-depth interview and audio commentary on select episodes with director/producer/writer Ladd, and an interview with anime historian Fred Patten from Animation World magazine. In addition, this deluxe set features special DVD-ROM content – issues 1-6 of the Gigantor comic book series from Ben Dunn and Antarctic Press, published in 2000. The 4-disc set also includes a 16-page collectible booklet with a brief history of the series, episode summaries as well as rare archival press materials/photos.

I found this trailer for a live-action Tetsujin 28 film that was released 2005 in Japan.

And here is the opening sequence of the classic 1960’s anime.