The French Connection is an exciting, taut and realistic portrayal of urban police life, and didn’t need to fill up screen time with gratuitous violence, unrealistic explosions and inordinate amounts of sex. The film’s lead detectives track a lead about a large drug delivery that develops into a plot that threatens to destroy the marijuana trade between France and New York City.

With convincing and memorable action sequences, hard-driven dialogue, one of the most thrilling chase scenes in film history and the uncanny charisma of Hackman and Scheider, The French Connection is one of the all time great cop films to date.

Special Features
The new release includes an amazing array of bonus features, including an entire featurette that deconstructs one of the classic cinema chases of all time, and features Friedkin and producer Philip D’Antoni revisiting some of the locations used for the scene and discussing not only the way the chase came into being, but how the film itself made it to the screen. 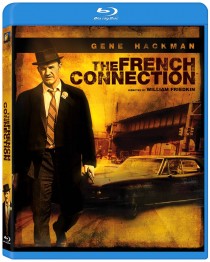 Also included are commentary tracks on the feature by Friedkin, and an additional commentary by Hackman and Scheider. I enjoyed both commentaries a great deal, but Friedkin’s focused more on the mechanics of filmmaking, which kept my attention more.

Other interesting features include a set of deleted scenes I hadn’t watched before, a featurette with Gene Hackman discussing the actual detective his character was based on; Another featuring Friedkin talking with Sonny Grosso, one of the officers involved in the actual real-life story.

There is also an entire BBC documentary called The Poughkeepsie Shuffle: Tracing The French Connection, which provides a great background to the movie. The documentary takes the viewer through the process that led from the actual drug bust which formed the basis for the movie, through several versions of the screenplay, and to the final Oscar-winning production. It also provides differing views on the filmmaking process, including a critical view of the director.

Here is a complete list of the bonus material on the disc set.

Below is a trailer for The French Connection