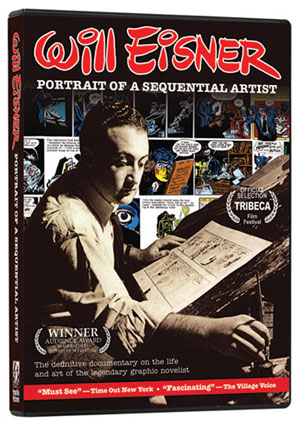 I was lucky enough to be invited to a screening of Will Eisner: Portrait of a Sequential Artist at the Tribeca Film Festival and I thoroughly enjoyed it. This is a superbly produced documentary on the most influential comics creator of all time. Though I may be a little biased since I am a fan of Will Eisner and have been since I was a teenager when I was first introduced to The Spirit in the self-titled magazine by Warren publishing. Little did I know at that time that these stories were from 3 decades prior. All I knew was that it captured my attention and was great storytelling.

The film is sprinkled with interviews of some of the most innovative comic book creators of all time including Frank Miller, Art Spiegleman, Stan Lee, Jules Feiffer, Joe Kubert, Harvey Kurtzman, Jerry Robinson and of course Eisner himself. It also includes some recorded audio interviews from Will Eisner’s archives from the early 1980s where we get to hear from Jack (King) Kirby and Neal Adams to mention just a couple. As Eisner was able to move our eyes around a page with his art, the filmmakers have used their own methods of panning and using graphic elements to compliment and introduce some original art from Will’s stories along with art from the other artists participating in the film.

After the film I had a short but delightful conversation with director Andrew D. Cook and found him to be thoroughly engaging and definitely could tell that this was a labor of love. It seemed to me that his intention for this film is to give the uninitiated a glimpse into what creators like Will Eisner have brought to our culture. My hats off to Andrew, his brother Jon, whose publication Comic Book Artist I highly recommend and the rest of the production crew. I recommend that everyone see this film and there is still one showing left this Sunday, May 6 at 11:45 am in Chelsea. To get more info on the documentary visit www.montillapictures.com.

Editorial by Lee Parmerter
Lee is a comics fan whose interests include graphic design, collectible figures and sci-fi films. Visit his online store which has hundreds of comic book related items signed by their creators at http://stores.ebay.com/The-Comic-Vault.