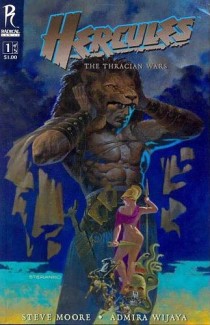 According to a story on Variety, Hancock director Peter Berg is looking to produce and direct Hercules: The Thracian Wars for Universal Pictures.

Ryan Condal will write a script based on a five-issue comicbook series by Steve Moore that debuted in May from Radical Publishing.

“What resonated for them was that this was character driven, about a character who’s more man than god, with conflicts and redemption,” Levine said.

This is the second comic property announced to be getting the big screen treatment from Radical. Radical Pictures is also producing Caliber with Johnny Depp and John Woo, with Woo attached to direct.

The article states that Berg is also set to direct and produce a new version of Frank Herbert’s Dune for Paramount. No word on if Berg is still attached to helm Conan creator Robert E. Howard’s opus Bran Mak Morn.