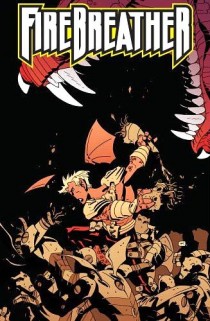 Cartoon Network has kicked off development on three new comic book titles including Firebreather, The Vanishers and Mice Templar. Image Comic’s Firebreather, created by Phil Hester, and Mice Templar, by Mike Avon Oeming and Bryan Glass, will be developed as animated original movies. IDW Publishing’s The Vanishers, created by Chuck Dixon, will be produced as a live-action original movie.

“We’re thrilled to expand our movie slate with both cinematic quality CG and live action,” said Ramsey Naito, vice president of long-form at Cartoon Network. “As we bring these and other titles into development, we’ll be seeking out projects that combine distinct voices with striking, contemporary visual worlds.”

Mice Templar is an epic based on Mike Avon Oeming’s (Powers) and Bryan Glass’ (Magician Apprentice) comic book series about a young mouse named Karic and the prophecy that leads him to reunite the long disbanded order of the Mice Templar. Karic, chosen to be a warrior, bravely rescues his village and carries on the tradition of this mighty band of mice-knights.

The Vanishers is Chuck Dixon’s (Batman comics) action-packed tale of fifth graders Andy and Arvis and their adventures through time. The duo sets out on their trans-dimensional mission to collect precious information from Arvis’ time-traveling family. It turns out the Arvises are on the run from a group of treacherous villains who are armed with deadly robots and are intent on taking control of time itself in an effort to enslave humanity. The Vanishers is executive-produced by Circle of Confusion’s Rick Jacobs (The Suffering), David Alpert (Them) and Ted Adams, president of IDW Publishing.