ReedPOP, the organizers of New York Comic Con (NYCC) and the inaugural New York Super Week (NYSW), have announced a partnership with Chevrolet and the app Uber that will offer attendees to this year’s New York Comic-Con special bonuses and contest prizes. As part of the partnership, Chevrolet has custom wrapped nine car models with iconic characters from comics, video games and literature that fans can Uber to events across the Big Apple. The specially wrapped vehicles have begun running and will be on the road through October 7th, the start of New York Comic-Con 2014. 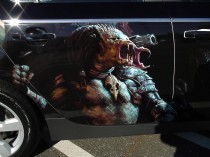 Fans will also be eligible to win a trip to NYCC 2015 with VIP Tickets and a Chevy Car Exclusives Prize Pack through the “Chevrolet Gives You the Keys to NYCC” contest. Fans are encouraged to tweet creative photos of one of the cars, using the hashtag #ChevyNYCC. Following the completion of New York Comic-Con on Monday, October 13th, NYCC and Chevrolet will pick the 10 best photos as finalists.

“This is the first year that we’re bringing New York Comic Con out of the Javits Center with New York Super Week and this partnership allows fans to get to where they need to be throughout New York City,” said ReedPOP’s Larry Settembrini. “Having some of the biggest brands custom wrap these Chevrolet cars will truly let everyone know that New York Comic Con is here and add another layer of pop culture to the week!”

As part of the partnership, Chevrolet will wrap nine different vehicles that fans can Uber to New York Super Week, throughout New York City. Some of these cars will also be on display at the Javits center during NYCC. The full lineup of cars includes:

Follow these steps to take advantage of the special Uber/Chevy/New York Comic-Con promotion: