Cult favorite filmmaker Don Coscarelli has announced today Phantasm: Ravager, the long-awaited fifth and final entry in his classic Phantasm horror series, has completed principle photography. The original Phantasm was a worldwide critical and boxoffice smash, spawning a huge fan base around the world, along with three sequels.

For the first time in the franchise’s history, a new director is helming the production, and that’s David Hartman. Hartman is a multiple Emmy-nominated animation director, whose work can be seen in shows including Transformers Prime and Roughnecks: Starship Troopers. Hartman also directed two blood-soaked music videos for Rob Zombie, including American Witch & Lords of Salem, and created illustrations of Steve Niles’ Strange Cases for Image Comics.

“I felt it was time to let someone else play with my train set,” noted Coscarelli, who co-wrote the film with Hartman and produced under his Silver Sphere banner. “David and I go back to my film Bubba Ho-Tep. He did terrific visual effects on that, and more recently created a wild animated sequence and some amazing visual effects in my most recent film, John Dies at the End. Our aesthetics are in sync and he’s quite an experienced director in his own right.”

“Having worked with Don [Coscarelli] before, and being a huge fan of the entire Phantasm franchise, it was a great honor to do Ravager with him,” says Hartman. “This film is a real turning point in the series. There’s real closure for the core characters that I hope fans will respond to. We were fortunate to shoot amazing new sequences with horror icon Angus Scrimm—he has terrific scenes with Reggie (Bannister) and Mike (Michael Baldwin) that are truly powerful.”

Production on Ravager took place in and around southern California over the past two years. “The Phantasm films have been a guerrilla operation for decades now, totally outside of the studio system,” Coscarelli notes. “We do them for the fans, and I think Ravager will definitely please them. In the past few years several studios have made offers to remake Phantasm with large budgets, but the fans were very vocal that they wanted the original cast to return and finish this iteration of the story with class. And for the first time there’s an extended sequence on the Tall Man’s home world. I know Phantasm fans will be as excited as I am to see it.”

Ravager features Reggie Bannister – a veteran of all five films – in his decades-long pursuit of the malevolent Tall Man and it finally forces him to confront the mysteries at the heart of the Phantasm saga. The entire original cast is back including Michael Baldwin, Bill Thornbury, Kat Lester and Angus Scrimm, along with great new characters.

Check out a teaser trailer below for Phantasm: Ravager, along with a teaser one-sheet poster for the film. 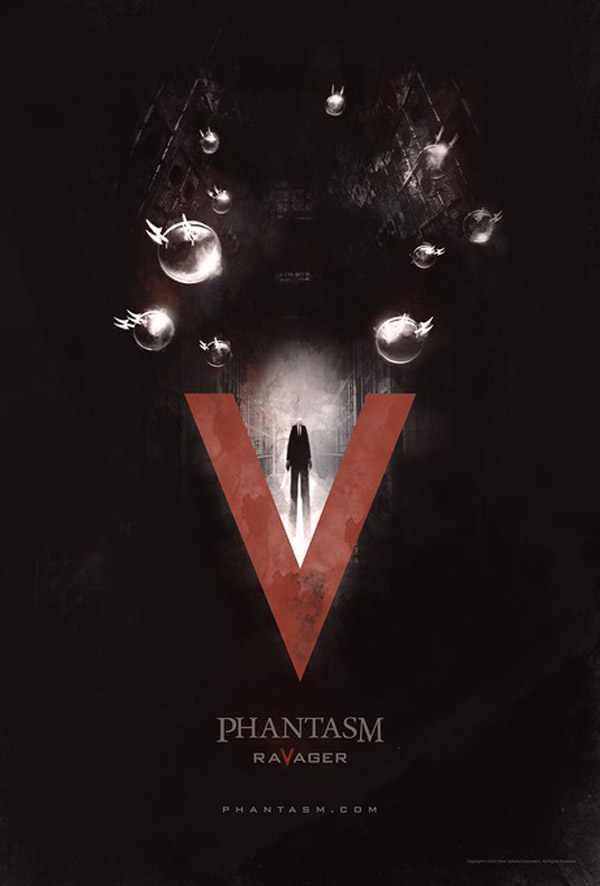