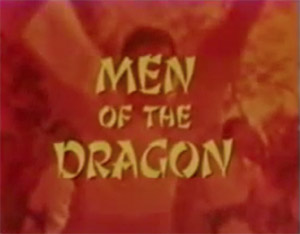 I was speaking to my friend Aaron Kai on the phone yesterday, and he reminded me about a little-known but groundbreaking 1974 television movie called Men of the Dragon. The film was shot in Hong Kong as a modern-day kung fu drama. The leading characters are three crimefighting martial arts experts. Americans Jan Kimbro (Jared Martin) and his sister Lisa Kimbro (Katie Saylor), return to Hong Kong, where they grew up, to visit his “oriental blood brother” Li-Teh (Robert Ito), who operates a self-defense school downtown. Lisa is soon kidnapped by a white slavery ring, leaving Jan and Li-Teh battle a gang of kung-fu killers led by the evil Balashev (Joseph Wiseman), in an attempt to rescue her.

Men of the Dragon co-stars Jared Martin and Kati Saylor would later re-team for the brief 1976 TV series Fantastic Journey and Robert Ito went on to play Sam Fujiyama for 7 seasons of Quincy M.E. Harry Falk – who had directed episodes of numerous television shows, including Mod Squad, Hawaii Five-O and The Courtship of Eddie’s Father – helmed Men of the Dragon from a script written by Denne Bart Petitclerc (creator of the short-lived 1969 NBC show Then Came Bronson).

Men of the Dragon, which originally aired on March 20, 1974, was an ABC Movie of the Week and was produced by David L. Wolper Productions, the company that went on to produce another groundbreaking miniseries for ABC in 1977, Alex Haley’s Roots. According to IMDB, the main villain, Balashev, was modeled after Enter the Dragon villain Mr. Han. Han, in turn, is frequently compared to the antagonist in the first James Bond film, Dr. No. Both Balashev and No were played by Joseph Wiseman.

The film was tagged as “the first martial arts movie made for television!,” although that technically wasn’t true because the Pilot for the TV series Kung Fu – a 75 minute film – aired in February of 1972. In any case, Men of the Dragon was the first “made for television movie” to feature Asian martial arts as part of the main theme.

Another interesting bit of trivia for Men of the Dragon is that martial arts supervisor David Chow also handled the same duties on the series Kung Fu (he also had bit roles in both projects). Chow was also the fight choreographer for the 1973 Cirio Santiago “stewardess-sploitation” film Fly Me and appeared in the Blaxploitation classic Three the Hard Way, which merged the martial arts genre with Black cinema of the era.

Below is video of the opening of Men of the Dragon. You’ll notice Joseph Wiseman introduced as the “Special Guest Star,” meaning this was indeed filmed as a pilot for a series of “Men of the Dragon” movies for ABC (which never materialized). There are also many nods to Enter the Dragon, such as the sounds effects, as well as the large metal door slamming down while Robert Ito is fighting Wiseman’s baddies (remember when Bruce Lee gets trapped by metal doors while fighting Han’s men?). The music, by Elmer Bernstein, is more reminiscent of the David Carradine show Kung Fu. Bernstein also composed music for The Trial of Billy Jack in 1974.

Below is a clip of Katie Saylor, after being drugged by Joseph Wiseman’s henchmen, in order to keep her pacified until she’s sold into white slavery.

Below is the original opening for the Kung Fu pilot movie, which aired in February 1972.