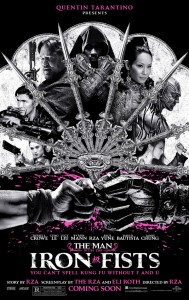 A few months ago I wrote a blog post about an article by the Wall Street Journal that discussed the current Hollywood interest in the martial arts genre. The WSJ article, titled Hollywood’s New Kick, talked about how martial arts films are going mainstream (and not just by integrating kung fu into Western story lines), and there are examples of this as varied as television shows like Nikita – a show starring a weapons- and martial arts-wielding secret agent, whose namesake character is Maggie Q – all the way to Keanu Reeves, who – possibly inspired by his months of training with Wu Ping’s stunt crew in preparation to play “Neo” in The Matrix – is about to star in not one, but two martial arts movies. . . . 47 Ronin and Man of Tai Chi. Both of these films shot in Asia, and the latter Reeves is directing.

Fast forward to summer 2012 and San Diego Comic-Con is just around the corner. San Diego Comic-Con is the largest popular culture event in the United States, boasting crowds of 150,000 and growing each year. It seems the stars are in alignment and winds are blowing from the East, because there will be a large number of martial arts-related content at this year’s massive Con. I’m not saying this is by any means a first. For the last 14 years, former Inside Kung Fu entertainment editor Ric Meyers, has been trekking out to San Diego, bringing with him the latest in martial arts cinema offerings from Asia and other parts of the world. In fact, it was one of Ric’s Comic-Con panels where I first heard of the amazingly talented martial artist Marko Zaror, star of the cult flicks Kiltro and Mandrill.

However this year, in addition to Ric Meyers celebrating the 15th year of his “Superhero Kung Fu Extravaganza,” Jackie Chan makes his SDCC debut inside of Hall H, where his latest film, CZ12 (also called Chines Zodiac) will preview. CZ12, written and directed by Chan, counts Oliver Platt among its cast. Also, Michael Jai White will be in town to give Comic-Con fans the latest information on all things Black Dynamite, at the Hilton San Diego Bayfront hotel. Quentin Tarantino, well known to be a Hong Kong cinema buff, will also land in Hall H during the festivities, where he’ll discuss his upcoming Western epic, Django Unchained. Tarantino’s friend – and fellow Asian cinema fanatic – RZA, will stop by the 2nd Annual Nerd HQ “Conversations with a Cause” series, to chat about his Man With the Iron Fist movie project, a film that boasts Russell Crowe, Lucy Lui, Jamie Chung, Dave Bautista, Cung Le and iconic cult cinema star Pam Grier, among its cast. Speaking of cult cinema stars, the legendary Jim Kelly, who co-starred with Bruce Lee in Enter the Dragon, will be signing autographs for fans all four days in the Sails Pavilion. Keeping in that 1970’s groove, groundbreaking comics artist Trevor Von Eeden – who co-created DC Comics’ first African-American superhero to star in his own featured title, named Black Lightning – will appear on the “That 70s Panel,” looking at comics from that era. For those who don’t know, one of Black Lightning’s skills was as a martial artist.

Speaking of Maggie Q and Nikita, she and the cast will host a panel to talk about the show’s latest plot points. The revenge spy drama was just picked up for a third season. Another female action star, Milla Jovovich – who was recently seen in a trailer for Resident Evil: Retribution, using a standard link chain in the same way a Wushu chain rope dart would be tossed around in a Shaw Brothers movie – will stop by Hall H to talk about the franchise sequel. I attended a preview for Resident Evil: Retribution in New York City recently, where Jovovich admitted to studying martial arts for years during a Q&A. And former mixed martial artist Randy Couture will talk about his role in Sylvester Stallone’s upcoming The Expendables 2, also taking place in Hall H. 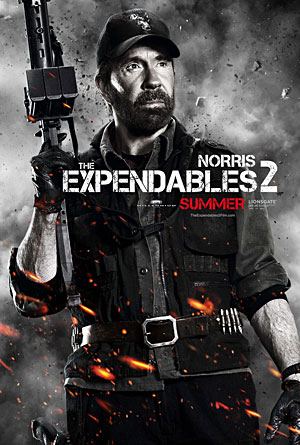 Two people that I am unsure about right now are cult cinema actor & martial artist Chuck Norris, who also appears in Expendables 2, and martial artist & actor Ernie Reyes, Jr., who recently posted a photo of his first comic book – Sonny Dragon – on his Facebook page. Norris could make a surprise appearance during the Expendables 2 panel, and Reyes could visit the show floor to sign copies of his comic. However, I have no solid information on either of these appearances.

Below is a list of panels and events that will showcase martial arts genre or related content, during San Diego Comic-Con 2012:

3:25 pm – 4:25 pm CZ12 — Jackie Chan & JJ Productions Limited are happy to bring you Jackie Chan’s upcoming classical full-action feature movie CZ12, which is produced and directed by Jackie Chan. The movie stars Jackie Chan, Kwone Sang Woo and with a special guest appearance by Oliver Platt. It is filmed in multi-territories including China, France, Hong Kong, Taiwan, Vanuatu, Australia, and Latvia. Trailers will be presented and a Q&A will be held for the film. Hall H

7:30 pm – 10:30 pm — Ric Meyer’s Superhero Kung Fu Extravaganza celebrates 15 years of the craziest, coolest, comical, and most cheer-worthy Asian action film fight scenes ever witnessed by human eyes! This time promises to be one of the most lunatic laugh-n-thrill fests yet, with the best (and worst) the East has to offer. As always, award-winning writer, consultant, professor, World Martial Art Hall of Famer, and Films of Fury: The Kung Fu Movie Movie scripter Ric Meyers is your host, welcoming guest stars such as Comedy Film Nerd podcasters Graham Elwood and Chris Mancini, independent action film idol Eric Jacobus, and even the legendary actor, choreographer, stuntman, and movie icon James Lew (and maybe even more). 15th time’s the charm. Don’t miss this one! Room 6A

12 noon Man with the Iron Fists panel, featuring star and director RZA, followed by a signing. Takes place during the Second Annual Nerd HQ “Conversations with a Cause,” at Block No. 16 Union and Spirits, located at 344 7th Avenue in San Diego

4:00 pm – 4:45 pm — Adult Swim: Black Dynamite — Creators and voice talent from the new animated series, based on the 2009 feature film will give an exclusive preview of the show and answer questions. The Black Dynamite animated series further chronicles the exploits of Black Dynamite and his crew. Panelists include executive producer Carl Jones (The Boondocks) along with Michael Jai White (For Better or Worse, The Dark Knight, Why Did I Get Married?), Tommy Davidson (In Living Color), Kym Whitley (The Cleveland Show, Brian McKnight Show), Byron Minns (Mongo Wrestling Alliance), Debra Wilson (MadTV), Orlando Jones (Rules of Engagement), and Cedric Yarbourgh (The Boondocks). Moderated by Gary Anthony Williams (The Boondocks). Indigo Ballroom, Hilton San Diego Bayfront

10:00 am – 11:00 am — That 70’s Panel takes a look at comics in the seventies. Some now call it the Bronze Age, but by any name it was an exciting time to be reading comics. Moderator Mark Evanier (Scooby Doo) leads a discussion including Marv Wolfman (Tomb of Dracula), Steve Skeates (Aquaman), Steve Englehart (Batman), Herb Trimpe (Incredible Hulk), Elliot S! Maggin (Superman), Trevor Von Eeden (Black Lightning), and Paul Levitz (Legion of Super-Heroes). Room 23ABC

10:00 am – 11:00 am — Comic-Con How-To: Anatomy of a Fight Scene, Part One — Stories are about conflict, and there is no purer form of conflict than a good ol’ fisticuffs-style brawl-or sword fight, laser battle, western shootout, or even two chicks pulling each other’s hair. How do you put that much action down on paper and make it not only believable, but enjoyable and exciting to read? Award-winning author Maxwell Alexander Drake brings you deep inside the violence, breaking it down piece by piece and giving you some tricks you can use to create more realistic and exciting fights. Room 2

11:00 am -12:00 noon Comic-Con How-To: Anatomy of a Fight Scene, Part Two — Understanding when and how to use physical conflict in your story is all well and good, but how do you write it? How do authors paint such a vivid, action-packed fight scene that readers can “see” in their mind using only the written word? Award-winning author Maxwell Alexander Drake peels back the mystery and looks at using words to craft action that readers will not simply read, but experience. Room 2

12:00 noon – 1:00 pm — Locked and Loaded — From hand-to-hand combat and cannons to AK-47s and the Death Star, the landscape of military conflict has changed…but the instinct to destroy has not. People love to read about the good guys blasting the hell out of paranormal villains, evil aliens, and ruthless government officials. These authors include pulse-pounding combat scenes in their novels and never shy away from applying deadly force when necessary. Strategize with Joseph Nassise (By The Blood of Heroes), Myke Cole (Control Point), Taylor Anderson (Destroyermen Series), Jack Campbell (Lost Fleet Series), Harry Turtledove (The War That Came Early), and S. J. Kincaid (Insignia), under the leadership of moderator Stephen W. Saffel, DEO/senior acquisitions editor, Titan Books. Room 23ABC

Seriously, if I did miss any martial arts-related content happening at San Diego Comic-Con 2012, please feel free to email it to me at web@byhandmedia.com, and I’ll try to post it before the show.

Thanks to Ric Meyers for the info on Keanu Reeves film Man of Tai Chi.