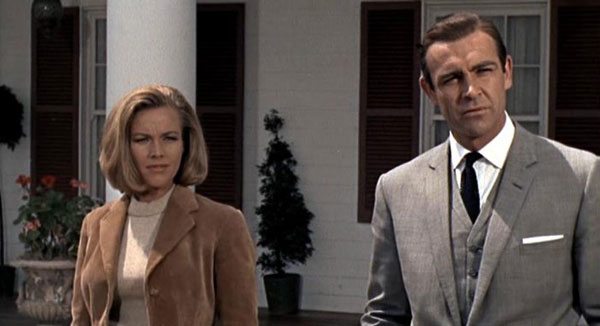 American Cinematheque at the Egyptian and Aero Theatres, will celebrate James Bond’s 50th birthday in style, as they present The Complete James Bond Retrospective: Bond at 50, co-Presented by the British Academy of Film and Television Arts Los Angeles (in celebration of their 25th Anniversary). The series runs from June 8th through June 24th, 2012, and includes all 22 Bond films.

Looking for a man to save the world, get the girl and look ever-so-suave while doing it? The name’s Bond – James Bond! Author Ian Fleming’s Agent 007 has been thrilling moviegoers for half a century, ever since Albert “Cubby” Broccoli and Harry Saltzman’s Eon Productions first brought the character to the big screen in 1962. Over the years, the Bond films have become the longest continuously running series in cinema history (and one of the most popular with more than $5 billion in box office receipts), and the British spy at their center has become one of the world’s leading trendsetters and sex symbols.

Since Sean Connery inaugurated the role in DR. NO, there have been five more 007s – George Lazenby (ON HER MAJESTY’S SECRET SERVICE), Roger Moore (from LIVE AND LET DIE to A VIEW TO A KILL), Timothy Dalton (THE LIVING DAYLIGHTS and LICENCE TO KILL), Pierce Brosnan (from GOLDENEYE to DIE ANOTHER DAY) and current star Daniel Craig. Recurring characters like M, Q, Moneypenny and Felix Leiter tie the films together – along with some truly dazzling title sequences and theme songs.

A “bigger is better” approach has kept the series fresh for five decades as each film tries to top the one before in eye-catching production design, cutting-edge technology and death-defying stunt sequences. And as Fleming’s original output was consumed, writers plumbed current headlines for storylines, making the Bond films a unique window into recent history and changes in popular culture.

In celebration of the 50th anniversary of the James Bond 007 franchise, the American Cinematheque presents all 22 Bond films. Included in the series are FROM RUSSIA WITH LOVE, THE MAN WITH THE GOLDEN GUN, THE SPY WHO LOVED ME, MOONRAKER, TOMORROW NEVER DIES, THE WORLD IS NOT ENOUGH, GOLDFINGER, THUNDERBALL, YOU ONLY LIVE TWICE, DIAMONDS ARE FOREVER, FOR YOUR EYES ONLY, OCTOPUSSY, CASINO ROYALE and QUANTUM OF SOLACE.
Series compiled by Grant Moninger. Program notes by John Hagelston.

The Bond at 50 James Bond retrospective takes place at the Egyptian and Aero Theatres, located at the intersection of Hollywood Blvd. and Santa Monica, in Los Angeles, California.

Get additional information on this American Cinematheque series RIGHT HERE.