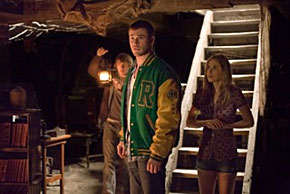 This Sunday, March 11th at 12:00pm CST, Lionsgate and Mutant Enemy Productions will present a discussion with Joss Whedon and Drew Goddard about their upcoming film, The Cabin in the Woods, moderated by HitFix’s Drew McWeeny, live from SXSW.

This is a chance for fans to find out more about the upcoming horror, by submitting questions for Joss and Drew at the Official Facebook Page for the film.

Then you can watch the live chat on HitFix, EPIX or Facebook to see if your question is picked.

Here’s the official synopsis for The Cabin in the Woods:

Five friends go to a remote cabin in the woods. Bad things happen.

If you think you know this story, think again. From fan favorites Joss Whedon and Drew Goddard comes The Cabin in the Woods, a mind blowing horror film that turns the genre inside out.

Produced by Whedon and directed by Goddard from a script by both, the film stars Kristen Connolly, Chris Hemsworth, Anna Hutchison, Fran Kranz, Jesse Williams, Richard Jenkins and Bradley Whitford.

Check out the latest trailer for The Cabin in the Woods, below.