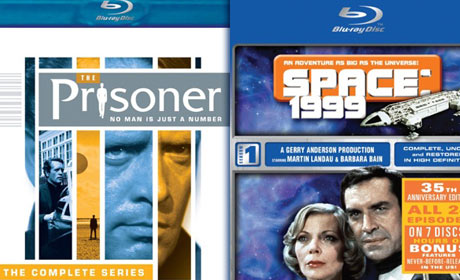 PLEASE NOTE: To be considered to win this and all other contests, your eNews profile must be updated with your current mailing address, not just your email. Only eNews subscribers are eligible for contest prizes. Sign up for free RIGHT HERE. For the special A&E Sci-Fi and Cult Classics Blu-ray Mega Prize Pack contest, you can be signed up for either list.

Space 1999: The Complete Season One

In the year 1999, a spectacular explosion at a lunar nuclear waste dump sends the moon out of Earth’s orbit. In this seminal sci-fi series from producer Gerry Anderson, the men and women of Moonbase Alpha are suddenly propelled on a treacherous journey across the universe in search of extraordinary new worlds.

The seven disc Space 1999: The Complete Season One set includes all 24 first season episodes, digitally restored and remastered in sparkling 1080p Blu-ray and sporting newly recorded 5.1 Surround Sound mixes. In addition, the BD set includes two bonus discs packed with hours of extras and featurettes never-before-released in the U.S., including:

In Anderson’s epic series, it’s 1999 when a spectacular explosion at a lunar nuclear waste dump sends the moon out of Earth’s orbit, propelling the men and women of Moonbase Alpha on a treacherous journey across the universe. Left with no way home, the Moonbase residents, led by Landau (Entourage, Ed Wood) and Bain (CSI, Mission: Impossible), are forced to embark upon the greatest adventure of their lives, encountering bizarre life forms and strange phenomena as they struggle to survive among the awe-inspiring wonders of deepest space. And, although, their ultimate journey only lasted two seasons and, in a New York Times review (1975), noted author Issac Asimov thought it implausible that so large a lunar base would exist by 1999, Space: 1999 captured and enraptured the minds and souls of a sci-fi hungry generation.

The Prisoner: The Complete Series

Since its CBS debut in the summer of 1968, the masterful British TV series The Prisoner, which starred Patrick McGoohan, has captivated American audiences. Now A&E presents a definitive aficionado’s edition of the cult classic which is considered one of the most innovative TV series ever filmed, for the first time in breathtaking Blu-Ray.

Fully restored from the original film elements with newly remixed 5.1 surround sound and featuring hours of bonus material never released in North America, The Prisoner: Blu-ray Edition is a fitting tribute to the creative vision of the late executive producer and star Patrick McGoohan.

After resigning from a top-secret position, a nameless man (McGoohan) is abducted and spirited from his London home to a mysterious place known only as The Village. Village Residents, known only by numbers, are held captive because each possesses valuable knowledge. The Prisoner, now known as Number Six, battles to protect his mind – and his humanity – while struggling to discover the identity of Number One and escape captivity.