Tombstone – which is available for the first time on Blu-ray – tells the story of the notorious showdown between retiring lawman Wyatt Earp (Russell) & his comrade Doc Holliday (Kilmer), who go up against a outlaw gang known as “The Cowboys”, at the O.K. Corral near Tombstone, Arizona. Russell as U.S. Marshall Wyatt Earp and Kilmer as the outrageous Doc Holliday both turn in iconic performances, telling a gripping tale of how the justice system worked in the Old West. Together, they struggle to rid Tombstone of a group of killer outlaws, ultimately leading to the showdown at the O.K. Corral. 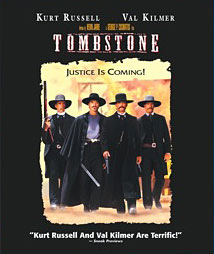 For those who’ve already watched Tombstone, you’ll appreciate the care that was taken in preparing the high-definition presentation. Watching Tombstone in the Blu-ray format was absolutely incredible. There was such attention to detail in the sound design of this film and the Dolby Digital surround-sound placed an emphasis on those subtle but important elements that add to the tension that punctuates the film’s story line.

While still light on extra material, Tombstone does include a well thought-out and thorough 3 part making-of featurette, as well as a look at the director’s original storyboards, which showed remarkable execution.