An editor over at MovieMaker Magazine emailed me the great cover below for their upcoming issue, which I thought I’d share with you guys. It’s just a great magazine to read. MovieMaker has just the right mix of news and resources, and gets revealing material from filmmakers of all stripes – action, drama, horror, indie, foreign and more – onto its pages.

Take the upcoming issue for instance, which has the inside track on Steven Soderbergh’s epic two-part biopic Che, starring Benicio Del Toro as the revolutionary icon, as they reveal the five deadly sins of screenwriting (and how to fix them), and also details Zack Snyder’s Golden Rules of Moviemaking, which include:

Storyboard: “Storyboards are not for everyone. As a matter of fact, I think some movies would be seriously damaged by the storyboarding process. But for me, it is how I make a movie; it is how I structure a scene. It’s not a shot list, it is an edited sequence. And although it can all change later, it is a good place to start.”

Movies are Pictures: “For me, visual style has the same importance as story, as character and as the environment. In the end, a movie is a series of pictures and I try to be aware of that at all times.” 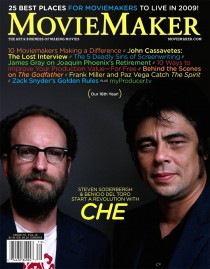 The issue also contains an extremely rare 1985 interview that was considered lost for years, with rebel filmmaker John Cassavetes; goes behind the scenes of the original Godfather; and allows you to watch as director James Gray bids a fond farewell to Joaquin Phoenix. Maybe they’ll finally answer the question – is Phoenix really giving up on filmmaking altogether?

The really cool thing about all of this, is that now you can make MovieMaker your favorite source for exclusive interviews, tips on screenwriting, breaking into the movie biz, festival information and much more. For a very limited time, you’re invited to take advantage of a very special offer – One year of MovieMaker at the unheard of price of just $9.95*. That’s 75% off the newsstand cost – simply for being a supporter of FilmFetish.com. CLICK HERE to sign up.

Sign up today and the Winter 2009 edition will be your first issue. So what are you waiting for? CLICK HERE to sign-up, and make sure you enter their latest contest. That’s right, here’s also a great contest on the site right now, giving away free copies of the horror/musical Repo: The Genetic Opera, helmed by Saw 2 thru 4 director Darren Lynn Bousman, which you can CLICK HERE to enter.

*additional shipping rates apply to all Canadian and international orders.