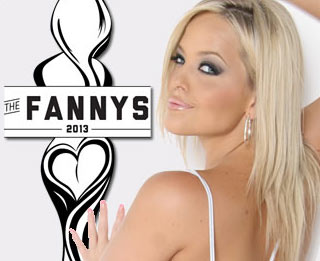 With the nomination round done and the finalists set, the epic showdown begins. Fans of adult entertainment can now vote on their favorites in a variety of categories for the inaugural Exxxotica Fan Choice Awards (www.thefannys.com). Fans are invited to visit the site to cast their ballots in the most important decision of the year — what stars of adult film and web take home prestigious trophies in The Fannys.

In addition to the fans picking their favorites during the nomination round, they were also tasked with picking the adult superstar to co-host alongside renowned comedians and hosts of VH1’s “That Metal Show,” Jim Florentine and Don Jamieson. After the votes were tallied, Adam & Eve contract star and the most infamous “fanny” in adult, Alexis Texas was chosen.

“My fanny and I are super excited to co-host the first-ever Exxxotica Fan Choice Awards,” Alexis Texas said when informed she had won the spot. “This is going to be so much fun and I am honored that ‘Team Texas’ worked so hard voting in ‘The Fannys’ for to host. It means so much when you win something like this that the fans actually select. I just know that I won’t disappoint and that Atlantic City will never be the same.”

“I can’t wait to host the ‘pink carpet’ at The Fannys,” said Allie Haze about her upcoming task. “If you have the honor of walking the carpet, you better be on your toes and ready for the interview you’ll never forget. I’m going to give Ryan Seacrest a run for his money and put years of watching the E! Network to use.”

“Response for the first round of voting was nothing short of incredible,” commented J. Handy, Executive Producer of The Fannys. “Everything from the votes received and ticket sales thus far have surpassed our expectations. This is going to be a night to remember and the party of the year.”

Some of the biggest names in adult are included in the final rounds, and while some are household names, there are many newer names that have received enough votes to make it to the final round. Asa Akira received the most nominations with 4, including Thirsty Girl, Non-White Chick of the Year, Most Heroic Ass and Most Valuable Vagina. All the finalists can be seen and voted on now at www.TheFannys.com.

The winners in these categories as well as additional B2B categories will be announced at the star-studded awards event, Saturday, April 20 in the Grand Ballroom of the Trump Taj Mahal Casino and Resort. Tickets are now on sale and include a three-hour open bar, with select ticket packages giving purchasers admission to the official after-party at Ivan Kane’s Royal Jelly Burlesque Nightclub, hosted by the legendary Tera Patrick.