Splinterheads, a comedy centered around a slacker, a gorgeous carnival worker, crazy boyfriends, the oldest man in the world, The Amazing Steve And the geo-caching craze that brings them all together, made its DVD debut yesterday, February 16th from Monarch Home Video. To celebrate the release, FilmFetish is giving away five copies of the DVD to readers.

In order to be entered into the random drawing for your free copy of Splinterheads, you must also: 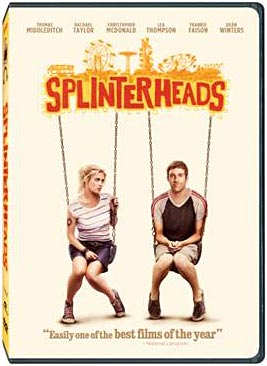 Called “Easily one the best films of the year,” by National Lampoon, Splinterheads brings home the insane humor of such slacker comedies as Adventureland and Superbad. Starring Brat-packer Lea Thompson (All the Right Moves, Back to the Future) and Rachael Taylor (Transformers, Shutter), Splinterheads launches the comedic talents of Thomas Middleton as Justin Frost, a twenty-something slacker who has decided that his “thing” is that he has no “thing” at all. When a small-time carnival rolls into town, he meets Galaxy, a gorgeous con artist who has more “things” going for her than anyone he has ever met. Targeting the 20-something fans of everything Judd Apatow, this uproarious comedy is sure to delight home entertainment audiences hot off its limited theatrical debut in 2009. The film makes its DVD debut on February 16th from Monarch Home Video and features an added gag reel and two shorts with The Amazing Steve.

When Galaxy takes Justin on a geocaching adventure, a GPS based activity that is part hike and part treasure hunt, he quickly falls for her. Complicating matters are his mom’s (Thompson) floundering relationship with a lovesick local cop (Christopher McDonald) and Galaxy’s insanely jealous boyfriend Reggie (Dean Winters). In order to win her over he’s going to need to step up his game, and maybe even figure out what his “thing” really is.