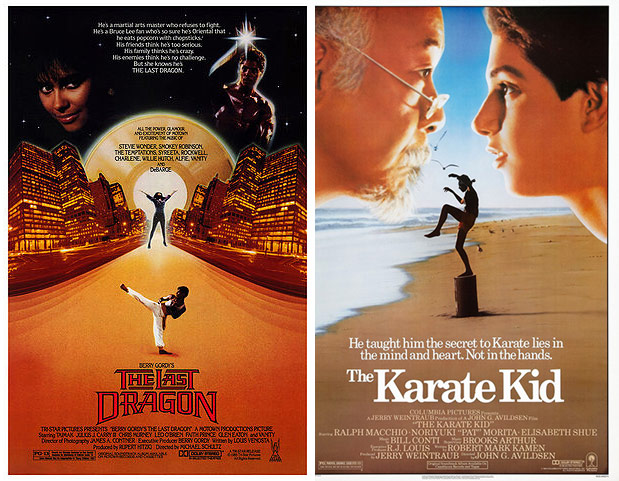 This year marks the 30th anniversary of two icons of American martial arts cult cinema – The Last Dragon and The Karate Kid. Both films were part of the unique lexicon of the 1980’s, where Americans were brought together after decades of countless wars, the Civil Rights Movement, and a series of major recessions, all through popular culture. The 80’s saw the rapid growth of Hip Hop culture and the rise of a “new” form of fighting – the Martial Arts.

What the 1970’s laid out as a foundation by way of underground nightclubs & roller skating rinks, urban movie theaters and even returning military veterans & their combat expertise, the 1980’s blew apart with television broadcasts such as “Drive-In Movie,” “Graffiti Rock” and “The Pilot.”

While some television concepts were more successful than others – “Graffiti Rock” lasted a single episode and only core old school Hip Hop heads know of the the only one-time aired episodic WNEW program “The Pilot” – film studios still wanted to take advantage of the growing U.S. fascination with Asian martial arts systems.

In order to get martial arts on the big screen with American flavor and teenage appeal, a number of screenplays made the rounds of Hollywood. Two of those concepts were for Berry Gordy’s The Last Dragon, co-written by Louis Venosta & Michael Schultz (who went on to direct the movie), and The Karate Kid, penned by Robert Mark Kamen. Both films were eventually made and released to an eager public. Now, 30 years later, both films will be honored with celebrations during two major pop culture events in New York City, New York Comic-Con (The Karate Kid) and the Urban Action Showcase (Berry Gordy’s The Last Dragon).

First up, Ralph Macchio, Martin Kove and William ‘Billy’ Zabka will be in attendance during New York Comic-Con from October 9th through the 12th, greeting fans and holding panel discussions on the making of The Karate Kid. The now classic film centered on a martial arts master (played by the late Pat Morita) who agrees to teach a bullied boy karate, showing him that there’s more to martial art than fighting along the way. Ralph Macchio played Daniel Larusso, a.k.a. ‘Daniel-san,” who waxed more classic cars than any kid in the history of movies. Martin Kove played John Kreese, an ex-Special Forces Vietnam Veteran who runs his karate school – the Cobra Kai dojo – like a boot camp, instilling his students with a Draconian philosophy he refers to as the “Way of the Fist,” which emphasizes ruthlessness and ferocity. And William Zabka played Daniel-san’s ash nemesis and local troublemaker Johnny Lawrence, who was also Kreese’s student in the film.

Then on November 8th, during indie film’s only all action movie convention, Urban Action Showcase, the Hilton Midtown & AMC Times Square will play host to the 30th Anniversary Celebration of The Last Dragon. The event will include: a screening of the film, followed by a Q&A session with cast members Taimak, Ron Van Clief ‘The Black Dragon,’ and Glen Eaton; vintage memorabilia from the film; autograph signings; and more.

In The Last Dragon, Taimak, of course, played the now cult favorite character ‘Bruce’ Leroy Green, a martial arts master and Bruce Lee fan who was so sure he was Asian that he ate popcorn with a pair of chopsticks. Glen Eaton played ‘Bruce’ Leroy’s close friend & student Johnny Yu. And the legendary Ron Van Clief, a.k.a. ‘The Black Dragon,’ handled fight choreography and a great deal of the stunt work on the film. In fact, many people don’t realize that there might not have been a Last Dragon if it wasn’t for Dr. Van Clief. Taimak was his student at the time and auditioned through his connection to ‘The Black Dragon.’

Find out details and purchase tickets to the 30th Anniversary Celebration of The Last Dragon at urbanactionshowcase.com.

Get details on the guests appearing at New York Comic-Con to support the 30th Anniversary of The Karate Kid at newyorkcomiccon.com.

Check out Taimak, “Bruce Leroy” himself, below, inviting fans to the Urban Action Showcase for the 30th Anniversary Celebration of The Last Dragon.