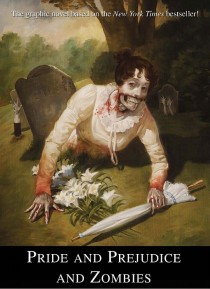 Variety reports that Pride Prejudice and Zombies – the long in development film adaptation of the Seth Grahame-Smith illustrated novel – may have risen again from the dead. Burr Steers is attached to direct the film, with Lily Collins in talks to star.

Pride Prejudice and Zombies follows the tangled relationships between lovers from different social classes in 19th century England, who must face another hurdle to their love — an army of zombies. The mash-up features an expanded version of the beloved Jane Austen novel with scenes of bone-crunching zombie mayhem added to the mix.

The project has been in development for years, with David O. Russell originally to direct, with Portman in the lead and Lionsgate as the distributor. But script troubles lead to Russell and Portman exiting due to scheduling conflicts.

Pride Prejudice and Zombies was in the middle of development when another mash-up, Cowboys and Aliens, disappointed at the box office, which may have scared producers away from another pricey genre film with a similar potential audience.

However the hiring of Steers shows there is still a lot of life in this zombie flick.