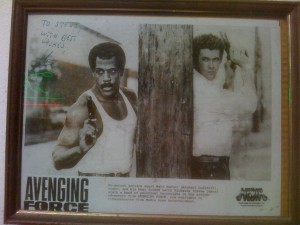 I snapped this photo while eating at a pizza parlor on Hollywood Blvd. in L.A. with my cousin Jerry. It’s a publicity photo from the 1986 movie Avenging Force, with Steve James and Michael Dudikoff. One of the guys behind the counter confirmed the signature is indeed Steve’s. He also mentioned that Steve was a really great guy and stopped in to eat there often.

Unfortunately, Steve James died of cancer in 1993 at the young age of 41. According to IMDB, eulogies at James’ memorial service were delivered by actor Sidney Poitier and director-writer S.C. Dacy. James was also a close friend of Exorcist director William Friedkin, who described him as “One of the most nicest, toughest and professionnal actors I’ve ever worked with.” Steve James also appeared in Friedkin’s To Live and Die in L.A.

Below is a quote from Steve James:

“I don’t like getting beat up much in films, but Jackie [Chan] could beat me up anytime. My first influence was Bruce Lee, and then I saw Jackie afterwards, and it was entirely different. When people ask me who I think is the best action star, I don’t say Stallone, I don’t say Schwarzenegger, I say Jackie. He’s my influence, I learn from him, that’s why I’m here.” – Steve James