Just in time for the holidays, I’ve prepared a few new reviews of some films that might be on your list to enjoy with some eggnog. First up is Mike Judge’s comedy Extract, which I had extremely high hopes for, Office Space fanatic that I am. Unfortunately, Judge doesn’t get anywhere near his Office Space heyday with Extract, resulting in an average comedy that was received with little fanfare or critical praise. While much better that his last effort – 2006’s Idiocracy – Extract doesn’t create much in the way of character development and interest.

It’s so difficult for Mike Judge, because he set his own bar so incredibly high with the cult hit Office Space, that his work is destined to forever be compared to that seminal comedy. It’s the same problem The Wachowski Brothers will always have, relating to their projects and the first Matrix film. And there were some parts of Extract to enjoy, most notably Jason Bateman and Mila Kunis’ performances, both of whom did their best with the material, along with strong supporting efforts by Kristen Wiig, J.K. Simmons, and Clifton Collins Jr. – whose character Step loses a testicle in the movie’s biggest wince-inducing moment. 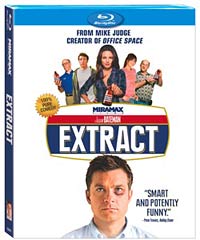 Extract’s center of gravity is Reynold’s Extract, a successful flavor-extract and bottling plant whose owner and founder, Joel Reynolds (Jason Bateman), is at a crossroads in his life. While contemplating selling the business he built from the ground up to General Mills, Step is considering suing after his on-the-job “loss”, and his remaining workers are threatening to go on strike.

Unlike Office Space, Extract doesn’t focus on the day-to-day life of average workers, which probably would have been much more fertile territory. Instead it focuses on Joel’s relationship with his wife, Suzie (Wiig). After hiring an airhead pool maintenance guy named Brad (Dustin Milligan) to seduce her – a plan suggested by his carefree bartender friend, Dean (played by Ben Affleck), to give Joel the excuse he needs to sleep with a hot new office temp named Cindy (Mila Kunis) – Joel is surprisingly shocked when Suzie easily succumbs to the pool boy’s charms – multiple times. So while Reynold’s Extract is on the brink of devastation, we’re supposed to focus on Joel’s personal issues of infidelity, along with his challenges dealing with an annoying neighbor (David Koechner), who’s hell-bent on forcing the Reynolds’ to go out with him and his wife.

While Extract is no where near a successor to what is widely considered one of the greatest comedies of all time, those who haven’t enjoyed Office Space will get some entertaining moments from this film. But it certainly doesn’t have the depth, nor the “re-viewing” legs of the classic Office Space.