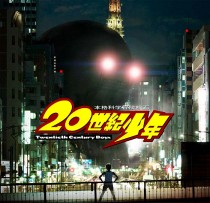 Synopsis
20th Century Boys is the first film in a planned trilogy with a budget of $57 million, that will be shot in seven countries, including China, Thailand, the U.K., Japan and the U.S. The first film will revolve around a “Book of Revelations” written by the main character in the Manga series, named Kenji and his friends, who dreamed of a hero who would stand up to an evil organization bent on destroying the world, during the era of rapid economic development in Japan. Thirty years later, a series of catastrophes occur exactly as described in the book, setting the world on a path to extinction.

Kenji must now look back on his childhood memories to uncover the secrets of a cult known only as “Friend,” which is linked to several deaths and may cause millions more to die throughout the world.

Director
Yukihiko Tsutsumi (He is also directing the 2nd part of the trilogy, called 20th Century Boy: The Chapter Two, due in theaters in Japan in 2009)

Release Date
Will be released in Japan on August 30, 2008

MORE ON THIS PROJECT

Manga Trailer
CLICK HERE to see some pages from the original Manga series, in a slideshow with music.

More Storyline Details
Back then little boys and girls once lived in the 20th century. They fought to save the world. Now, with the human race on the verge of extinction, the final adventure begins. Can these brave men and women save mankind from impending annihilation?

Character Descriptions
Kenji Endo
Central character first the half of the story, which revolves around his childhood in the ’60s until about 2004. He is heavily into Rock music. He disappears after the events of the Bloody New Year’s Eve, but is still possibly alive.

Kanna Endo
Kenji’s niece, she serves as the protagonist for the events in the aftermath of the “Bloody New Year’s Eve”. She seems to possess supernatural abilities from an unknown source. She leads a rebellion against Friend.

Otcho
Kenji’s childhood friend and benefactor, he typically is referred to as “Shogun”.

Friend
A character that draws on childhood ideas of Kenji and his friends to commit acts of terrorism and gain power. Friend pretended in the New Year’s Eve of 2000 to have saved the world from a pandemic virus similar to Ebola.

Yoshitsune
Kenji’s childhood friend. He was one of Kenji’s friends who answered the call to fight with him on the Bloody New Years Eve. He later becomes the leader of an underground organization trying to take down Friend.

God
An old homeless who warned Kenji of his future.

Yukiji
Kenji’s only female childhood friend. During their childhood, she was declared the strongest girl in the world.

Film Fetish Trivia: According to a report on Animenewsnetwork.com, the simultaneous shooting of the first two chapters of the trilogy will last from January 2008 through the end of June. The third chapter’s filming will last from the middle of August 2008 until the end of October. The 2nd chapter, tentatively titled 20th Century Boy: The Chapter Two, is expected to be released sometime in 2009.