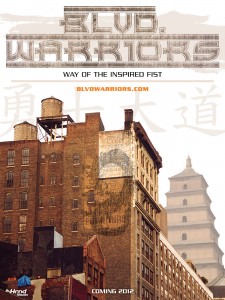 Whether it’s community centers, world-class competitions, music, or kung fu cinema, the martial arts have been a tremendous influence on the culture and aspirations of black and urban Americans for decades. Blvd. Warriors tells the little-known story of how Asian fighting arts and the movies that feature them, pierced the lives of those in communities struggling with parallel issues.

Through a series of interviews, movie clips and historical documents, the documentary tracks a history that evolved from a combination of natural ability, the desire for change, societal exclusion, and basic human instinct. The search for power, hope, identity, haphazard entertainment, reflective heroes and respect, triggered a confluence of events that have lead to a standard in American culture. That standard has transcended race, politics, cultural stereotypes – and in some cases – the very limits of human endurance. Blvd. Warriors shines a light on experts of the martial arts, trailblazing entertainers, pop culture references, and everyday people whose lives have been permanently impacted through their exposure to, and ultimately their respect of, this unique way of life and its cultural origins.