SneakOnTheLot.com today announced the beta launch of its new filmmakers’ social networking website. The site combines filmmaking skills such as writing, directing, producing and acting, all within an online, interactive game where players compete throughout the year for their shot at producing a $20,000 short film in Los Angeles. In this new back lot environment, players walk from building to building, cultivating a networking world wherein they bump into someone they do not know but soon will. Armed with comprehensive filmmaking tools and resources one finds on a studio lot, SneakOnTheLot.com helps players gain unprecedented access to the studio system directly, anywhere, anytime. 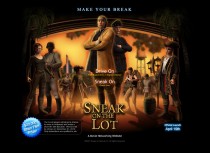 Additionally, the site offers over 30,000 licensed music tracks as well as over 60,000 licensed sound effects from Soundelux’s Hollywood Edge Library for players to legally download and put in their films. Valued at over $50,000, subscribed players can get full access to the music and sound effects for free. These features are all housed within buildings on the lot.

SneakOnTheLot.com was created by industry professionals who are bringing their network of producers, casting directors, agents and studio executives to find their next “A-List” talent. Designed like an actual studio lot, the social networking site has an easy-to-use interface, with a unique retro look and feel. With over 20 avatars to choose from, players are encouraged to customize their profiles and experience the studio system of filmmaking. Additional features such as a comprehensive, real-time casting and audition sessions along with, test screenings, premieres and multi-writer scriptwriting software will be added to SneakOnTheLot.com over the coming months.

“SneakOnTheLot.com is a game based on talent,” said Co-Founder and CEO Chet Thomas. “As your skills increase online, so too does your opportunity to be recognized in Hollywood. Players with the highest skills are ranked at the top of the A-List, and are considered the most talented. These A-Listers will get noticed by Hollywood decision-makers who will help them make their online fantasy become their offline reality.” 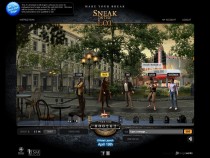 SneakOnTheLot.com is free for players to network, watch and review movies, gain prestige, have their own back lot office, explore and demo most of the features. A $5.95 monthly subscription fee provides an in-depth access to all the tools and resources the site offers. The site is also available to 18 and under players, with parental filtering controls for age-appropriate content. All subscribed members are automatically entered into the $20,000 short film competition.