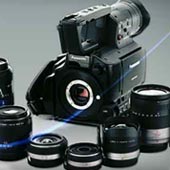 At ShootItShareIt.com, contestants can submit up to five videos (each up to five minutes in length) in six categories – nature, short film, commercial, music video, documentary or student – demonstrating their creative work with the AF100. A grand prize, consisting of a Panasonic 42” TH-42BT300U Pro Plasma Reference Monitor plus a Vocas Micro Four Thirds to Prime Lens Adapter (valued at more than $5,000), will be awarded to the contest winner. A Vocas Matte Box and Rail system will be awarded to each of the category winners.
From March 12th through April 4th, the public can choose among 18 semi-finalists (three per category) and vote on-line at ShootItShareIt.com for the first-place winner in each category. A panel of judges will select the grand prize winner.

The category winners and the grand prize winner will be announced during the NAB 2012 show in Las Vegas, NV (April 16-19), as well as on the contest web site.

Shoot It Share It (the “Contest”) is open only to legal residents of the fifty (50) United States and the District of Columbia who have Internet access and access to a Panasonic AG-AF100.

The AF100 incorporates a large 4/3-inch, 16:9 MOS imager (with an imaging area just slightly smaller than 35mm cinema film) that minimizes skew with fast imager scanning, and incorporates an optical low pass filter for elimination of aliasing and moiré. The camcorder records 1080 at 60i, 50i, 30P, 25P (Native) and 24P (Native), and 720 at 60p, 50p, 30p, 25p and 24p native in AVCHD’s highest-quality PH mode (maximum 24Mbps). The AF100 also records in AVCCAM’s HA (17Mbps) and HE (6Mbps) modes, 1080i only. Ready for global production standards, the camcorder is 60Hz and 50Hz switchable. Equipped with an interchangeable micro 4/3-inch lens mount, the AF100 can utilize an array of low-cost, widely-available still camera lenses as well as film-style lenses with fixed focal lengths and primes. Variable frame rates (VFR) are available in 1080p, selectable in 20 steps from 12p to 60p at 60Hz and 20 steps from 12p to 50p at 50Hz. The camcorder has a built-in stereo microphone and features two mic/lines, switchable XLR inputs with +48V Phantom Power capability.

For complete contest rules and to learn more about the “Shoot It. Share It” video contest, visit www.ShootItShareIt.com. 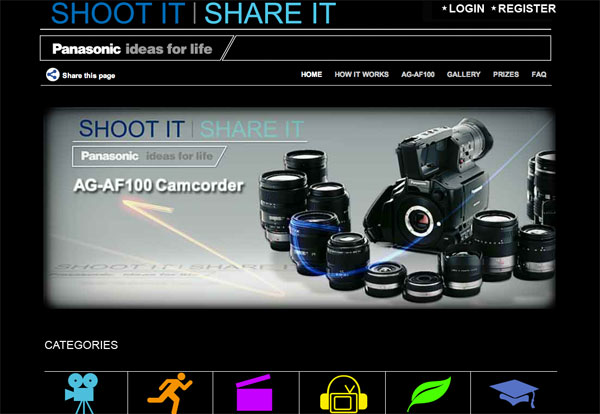