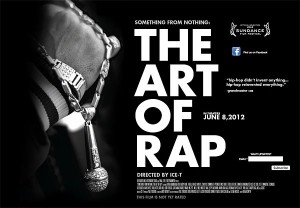 Here’s continued evidence of the cross-cultural influences between Asian and urban culture. Producer and distributor The Indomina Group just announced the North America theatrical release date for Something From Nothing: The Art of Rap, the Ice-T-directed documentary that premiered at this year’s Sundance Film Festival.

I think you get my point. An indie distributor known for snapping up rights to some of the most highly-regarded Asian imports today, has shown an interest in a documentary on rap music.

According to the company’s release, Ice-T is very excited about the summer release, and Indomina is working on an impactful and significant marketing presence for the film.

Other recent acquisitions for The Indomina Group have included the comedy A Fantastic Fear of Everything starring Simon Pegg, and the thriller Life Without Principle – the newest film from Hong Kong action cinema icon Johnnie To.

If all of that isn’t enough, the company is teaming up with Samuel L. Jackson to produce a live action Afro Samurai movie based on the popular anime series.