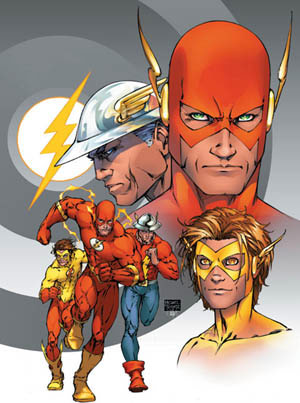 Variety reports that CW president Mark Pedowitz, speaking at the network’s TCA session on Tuesday, confirmed the development of Flash, a drama project based on the DC character. The show will apparently be seeded into the CW’s superhero drama Arrow. The Flash TV show introduction continues The CW trend of leveraging a property with a pre-existing fan base as the inception point for a new series.

“We do want to expand upon the DC universe,” Pedowitz explained to the room of journalists. “We think they’re rich characters we can use, and this is an organic way of doing it.”

Flash will be an origin story of the character, beginning with the death of Barry Allen while stopping the Anti-Monitor and Wally West assuming the mantle of The Flash. He has to deal with fading powers as well as the mental unstability of his longtime friend Hal Jordan. Flash will be developed by Arrow co-creators Greg Berlanti and Andrew Kreisberg, along with director David Nutter, according to Deadline.

Berlanti and Chris Brancato have also been developing a Flash screenplay for a potential 2016 film. No word yet on whether the series will derail or delay the movie plans.