Renowned for a tradition of empowering the Maverick via discovery, distribution and innovation, Cinequest Film Festival 19 delivers the theme Transform. Committed to serving more during times of social and economic change, Cinequest will transform via celebration, innovation, humor, love, provocation, and inspiration. Six hundred artists and innovators will unveil 150 films and forums to audiences projected to exceed 80,000. Events and screenings occur in spectacular venues within a three block radius – in San Jose, California – from February 25 – March 8, 2009. Highlights include:

A unique position in the Silicon Valley enables Cinequest to access latest innovations that empower film making, exhibition and distribution–keeping Cinequest and its communities ahead of the curve. Cinequest Film Festival 19 delivers three days of Film & Innovation Forums to motivate, educate and fascinate both filmmakers and film fans. This year’s forums include:

THE MARRIAGE OF TELEVISION & THE INTERNET: Home entertainment systems remain the preferred means for the majority of film viewing; however, the Internet has made great strides in democratizing film delivery, providing more choices, and making it easier to browse, socialize, select and view films. What if these worlds came together, integrating into one experience we’ll call Internet Television? Could film lovers enjoy the best of all worlds while giving Independent and International filmmakers more audience and more money? Could this be the Holy Grail for Mavericks?
LIGHTS, CAMERAS…P2: At Cinequest, film producers, directors and cinematographers have discovered the latest and greatest breakthroughs to bring their visions to screen. Technologies must serve the story, artistry and the budgets of filmmaking to have impact. P2 (solid state filmmaking) provides many of the best opportunities for filmmakers today. Join an exciting visual and interactive presentation of the cameras, production & post-production workflows for this groundbreaking way to make films better, faster and cheaper.
Transform — Humor

Comedy premieres include: HOW TO BE… starring the widely-popular and talented Robert Pattinson (Twilight), is a true audience favorite, focusing on the coming-of-age story of a young man who hires a self-help author to move in with him and his parents to solve the source of his problems. Danny Masterson (That 70s Show, Yes Man), Blanchard Ryan (Open Water), Dominique Swain (Lolita) and Leon (Get Rich or Die Tryin’) star in Julian Kheel’s heist comedy CAPERS: a multi-perspective narrative that cleverly utilizes new technologies to craft a hilarious story of three badly executed heist; all after the same treasure.

Cinequest transforms the notion of love beyond the standard formula and generic concepts of romance. The films in this year’s program reclaim thoughts of passion, hidden desire, and intimacy including TANDOORI LOVE, which mixes music, love and food for a spicy and infectious concoction; and the United States Premiere of the vibrant HOW AM I NOT GOING TO LOVE YOU.

Legendary (Academy Award Winner, An Officer and a Gentleman) Louis Gossett, Jr. receives Cinequest’s Maverick Spirit Award after a screening of THE LEAST AMONG YOU, based on the truly inspirational story of a young, African-American man sent to an all-white school where prejudice is the enemy. The film co-stars Lauren Holly (Picket Fences) and William Devane (24). Winner of this year’s Kaiser Permanente Thrive Award, HEART OF STONE inspires through the story of a principal who changed gang members through a groundbreaking program. A glorious portrait of the Man in Black and his music, JOHNNY CASH AT FOLSOM PRISON reveals the impact Cash’s music had on the inmates of Folsom Prison and how his fight for prison reform has had everlasting effects on their souls; and RAGING GRANNIES portrays a dynamic band of aging activists.

Get the complete lineup, buy tickets, or download Blackberry and iPhone applications at www.cinequest.org. 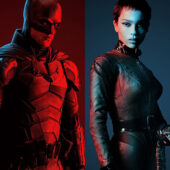