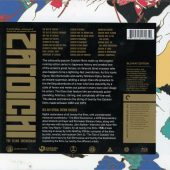 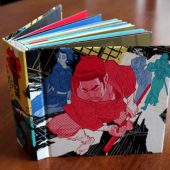 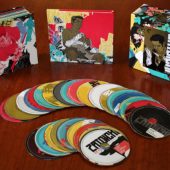 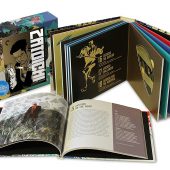 The colossally popular Zatoichi films make up the longest-running action series in Japanese history and created one of the screen’s great heroes: an itinerant blind masseur who also happens to be a lightning-fast swordsman. As this iconic figure, the charismatic and earthy Shintaro Katsu became an instant superstar, lending a larger-than-life presence to the thrilling adventures of a man who lives staunchly by a code of honor and delivers justice in every town and village he enters. The films that feature him are variously pulse-pounding, hilarious, stirring, and completely off-the-wall. This deluxe set features the string of twenty-five Zatoichi films made between 1962 and 1973, collected in one package for the first time.

Zatoichi and the Chest of Gold

Director: Kazuo Ikehiro 1964
After arriving in a small village, Zatoichi finds himself accused of stealing the citizens’ hefty tax payments. To clear his name, he must face off against a corrupt official, a succession of hired blades, and a bullwhip-wielding titan.

The Tale of Zatoichi Continues

Director: Kazuo Mori 1962
Zatoichi is hired to give a massage to a powerful political official who, he discovers, is mentally ill—a secret that the nobleman’s retinue is determined to keep at any cost.

Director: Kenji Misumi 1964
While on the road, Zatoichi befriends a young mother right before she is savagely murdered. Promising her that he will hand over her baby to its father, the blind masseur embarks on an adventure both sentimental and beset by perilous action.

Director: Tokuzo Tanaka 1963
Zatoichi triumphs at a village wrestling match, much to the chagrin of his yakuza opponents. The defeated gang members pay a hotheaded ronin to take out the masseur; unbeknownst to them, the hired assassin is married to a former flame of Zatoichi’s, further complicating matters.

Zatoichi on the Road

Director: Kimiyoshi Yasuda 1963
The itinerant Zatoichi comes across a dying man, who begs the masseur to escort a young woman back to her family in Edo. The honorable swordsman agrees, but in so doing, he catapults himself between two warring yakuza clans, each with its own interest in kidnapping the girl.

Director: Kazuo Ikehiro 1964
The blind swordsman is shot and nursed back to health by kind strangers. He soon discovers that his saviors are caught between sparring crime lords; bound by honor, Zatoichi stays to ensure their safety.

Director: Kimiyoshi Yasuda 1964
The blind swordsman wanders into a town to celebrate the New Year. There, he befriends a young woman whose father has gone missing; as he tries to help her find him, he becomes entangled in a web of corruption and a series of tragic twists of fate.

Director: Kenji Misumi 1968
Hired by a yakuza boss to eliminate an accused debtor, Zatoichi fulfills his task, only to witness the victim’s sister paying the owed amount minutes later. When the crime lord tries to possess the woman along with the cash, the blind swordsman wrestles with the injustice he has caused.

Director: Akira Inoue 1965
Nearing the village of his sensei, Zatoichi decides to pay the teacher a visit, only to learn that he has been murdered and his daughter forced into prostitution.

Zatoichi and the Doomed Man

Director: Kazuo Mori 1965
An elderly prisoner accused of murder begs Zatoichi to find evidence of his innocence. The blind swordsman, for the first time, chooses not to help, but fate has other plans for him.

Zatoichi and the Chess Expert

Director: Kenji Misumi 1965
Kenji Misumi, who directed the first installment of the Zatoichi series, returns with this tale in which the blind swordsman once again finds himself the protector of a child: a little girl pursued by both devious family members and bloodthirsty ruffians.

Director: Tokuzo Tanaka 1966
Zatoichi encounters a dying man, who asks the itinerant masseur to deliver a bag of money to his young son; he agrees to fulfill the request, finding the boy in a village terrorized by criminals.

Director: Kazuo Ikehiro 1966
Troubled by his violent past, Zatoichi begins a journey to a series of shrines for a dose of cleansing spirituality. But as always, trouble isn’t far behind, and the blind swordsman soon finds himself defending a widow from the self-interest of ruthless thugs and despicable townsfolk.

Director: Kimiyoshi Yasuda 1967
Wearying of his wandering lifestyle, Zatoichi yearns to settle down; unfortunately, when he does so it’s in a town overrun by yakuza. He has an eye-opening encounter with the town’s blacksmith, who reveals himself to be the apprentice of the man who forged Zatoichi’s legendary cane sword.

Director: Kenji Misumi 1967
A dying woman begs Zatoichi to reunite her son with the father he has never met, but when the blind masseur searches for the man, he discovers that he has been forced by a local yakuza boss to pay off his gambling debts in an unusual way: by painting illegal erotica.

The Tale of Zatoichi

Director: Kihachi Okamoto 1970
Zatoichi treks to a village that has always been a favorite spot of his, only to discover that it’s become a living hell, plagued by feuding father and son yakuza as well as the younger crime boss’s bodyguard—Toshiro Mifune’s scruffy, smart-mouthed, cash-hungry Yojimbo of legend.

Zatoichi Goes to the Fire Festival

Director: Kenji Misumi 1970
Cowritten by star Shintaro Katsu, this adventure pits Zatoichi against one of his most diabolical foes: a blind yakuza boss whose reign of terror and exploitation has made him nearly mythic.

Director: Kazuo Mori 1972
Zatoichi comes across a pregnant woman dying from sword wounds and helps deliver her baby. Her final request to him: take the boy to see his father.

Director: Shintaro Katsu 1972
Star Shintaro Katsu sits in the director’s chair for this psychedelic and unremittingly bleak entry in the Zatoichi series, which is unlike any other in its grind-house grimness.

Director: Kimiyoshi Yasuda 1973
Capping off Zatoichi’s feature film era before he made the transition to television in 1974, this chapter is suffused with melancholy, closing the series on a note of seriousness and emotional heft that it has well earned.

Zatoichi and the Fugitives

Director: Kimiyoshi Yasuda 1968
The wandering swordsman finds himself in a small village that serves as hideout for a band of fugitives who control the town officials and enforce brutal slave labor in the local silk mill.

Director: Tokuzo Tanaka 1963
Zatoichi is back—and in color! Hoping to leave violence behind, the blind masseur wanders to a village, where he meets an old friend fallen on hard times.

Director: Satsuo Yamamoto 1967
Zatoichi arrives in a town where a gambling house is kidnapping its poor, debt-ridden patrons. A rival establishment moves to pay those debts and free the peasants, but this second house’s seemingly altruistic boss is actually laying the groundwork for a ruthless money-grabbing scheme.