To celebrate the release of the new film, and the DVD, Disney is providing FilmFetish.com with three copies of the classic release for readers.

I’ll be running this contest through the DVD release date of March 10th. Good Luck!

More about Return From Witch Mountain
Screen legends Bette Davis (All About Eve, What Ever Happened to Baby Jane?) and Christopher Lee (The Lord of the Rings Trilogy) star as master criminals, along with Kim Richards and Ike Eisenmann, in a sequel every bit as exhilarating and fun as its inspiration. 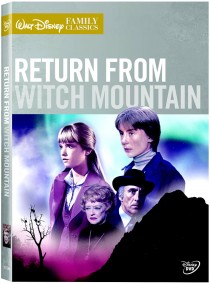 Long before Harry Potter and the Narnia movies, the Witch Mountain films created a world in which children learned to use their magical powers. In the 1978 sequel, Return From Witch Mountain, the Malone children recruit a band of juvenile delinquents to help them battle a pair of criminal masterminds played by Bette Davis and Christopher Lee, who Daily Variety called “one of the best Disney villains in years.” Both Eisenmann and Richards make cameos in the new Race to Witch Mountain, a modern re-imagining of the original Witch Mountain story featuring Dwayne Johnson, AnnaSophia Robb, Carla Gugino and Alexander Ludwig.

The new Walt Disney Family Classics DVD editions both contain extensive bonus features, including all new Pop-Up Fun Facts, filmmaker commentaries, and more. They will be available in stores on March 10th, three days before the theatrical release of Race to Witch Mountain.

Below is the trailer to Return From Witch Mountain. There’s hints of Enter the Dragon background music in this trailer.