On March 10th, 2009, Walt Disney Studios Home Entertainment will release the classic tale Escape to Witch Mountain, on Special Edition DVD, in anticipation of the release of the new Race to Witch Mountain, which hits theaters just a few days later, on March 13th.

To celebrate the release, Disney is providing FilmFetish.com with three copies of the DVD for readers.

I’ll be running this contest through March 10th. Good Luck! 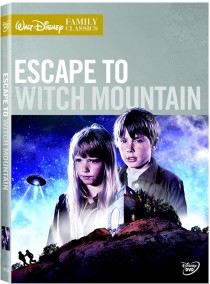 Long before Harry Potter and the Narnia movies, the Witch Mountain films created a world in which children learned to use their magical powers. In Escape to Witch Mountain, first released in 1975, orphaned siblings Tony and Tia Malone (Ike Eisenmann and Kim Richards) discover their paranormal powers and learn the truth about their origin. Both Eisenmann and Richards make cameos in the new “Race to Witch Mountain,” a modern re-imagining of the original Witch Mountain story featuring Dwayne Johnson, AnnaSophia Robb, Carla Gugino, and Alexander Ludwig.

The new Walt Disney Family Classics DVD editions both contain extensive bonus features, including all new Pop-Up Fun Facts, filmmaker commentaries, and more. They will be available in stores on March 10, three days before the theatrical release of Race to Witch Mountain.

An evil millionaire (Ray Milland) lures Tony and Tia Malone (Ike Eisenmann and Kim Richards) to his mansion in order to exploit their paranormal abilities for his own greedy purposes. Escaping their would-be captor with the help of a vacationing widower (Eddie Albert), the siblings discover puzzling clues about their origins that eventually lead them on a thrilling journey home to far away Witch Mountain. Adapted from the book by Alexander Key, the movie brims with timeless appeal and amazing acts of wizardry that will delight young and old alike. Starring Eddie Albert, Ray Milland, Donald Pleasence, Kim Richards, Ike Eisenmann and a flying RV.

Below is a video featurette of behind-the-scenes filming of Race to Witch Mountain, which will be in theaters on March 13, 2009.