Rogue Pictures, the same shop that brought us the remake of Assault on Precinct 13, has a horror flick on tap for later this year. The film is called Cry Wolf.

Cry Wolf is a modern-day retelling of The Boy Who Cried Wolf, that revolves around high school kids creating a ruse involving a serial killer named “The Wolf.” It’s a game that turns terrifyingly real.

Check out photos , the trailer and more from the set of the film RIGHT HERE » 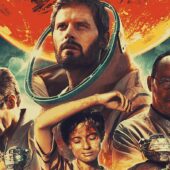