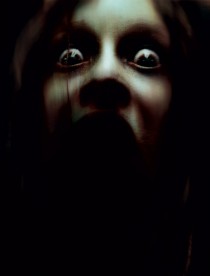 Re-doing Asian horror films seems to be the standard for Hollywood these days. But with Aja at the helm, things could rise to a more visceral level, making for some penetratingly creepy moments. Aja has a way of simplifying action and making it seem as if events are actually happening, even if there’s an incredibly unbelievable premise, as in The Hills Have Eyes. He cuts through the red tape of complexity with solid storytelling, and focuses on what’s really important with horror…making you spit up your popcorn as often as possible.

Writers: Mirrors is based on the Korean movie Into the Mirror, which was written by Sung-ho Kim. The script was co-written by Aja and his frequent collaborator Grégory Levasseur.

Synopsis
From the director of The Hills Have Eyes comes Mirrors, the terrifying story of a troubled ex-cop who must save his family from an unspeakable evil that is using mirrors as a gateway into their home.

Ben Carson (Kiefer Sutherland) has seen better days. It’s been nearly a year since the volatile detective was suspended from the NYPD for fatally shooting another undercover officer, an accident that not only cost him his job, but fueled the alcoholism and anger that has alienated his wife and kids and left him crashing on his sister’s couch in Queens.

Desperate to pull his life together and reconnect with his family, Carson takes a job as a night watchman at the burned-out ruins of the Mayflower department store. What once was a symbol of prosperity and grandeur now sits decaying in the darkness like a rotting ghost ship, destroyed by a massive fire that devoured numerous innocent lives.

As Carson patrols the eerie, charred remains of the store, he begins to notice something sinister about the ornate mirrors that adorn the Mayflower walls. Reflected in the gigantic shimmering glass are horrific images that stun Carson.

Beyond projecting gruesome images of the past, the mirrors appear to be manipulating reality as well. When Carson sees his own reflection being tortured, he suffers the physical effects of his fractured visions. Suddenly the troubled ex-cop finds himself battling his personal demons and the ones that have hijacked his reflection, tormenting him with convulsions, spontaneous bleeding and near suffocation.

His sympathetic but skeptical sister Angela (Amy Smart) dismisses these bizarre “nightmares” as a consequence of his stress and guilt over the accidental shooting, but Carson’s estranged wife Amy (Paula Patton), a no-nonsense NYPD medical examiner, is less forgiving. Her husband’s increasingly erratic behavior frightens her, pushing his family farther away – and, she fears, it’s putting their children in danger.

But a much deadlier threat looms, trapped within the mirrors and reflective surfaces that pervade their everyday life. As Carson investigates the mysterious disappearance of a Mayflower security guard and its possible connection to his ghastly visions, he realizes that a malevolent, otherworldly force is using reflections as a gateway to terrorize him and his family.

If he has any hope of saving his wife and children from a horrifying death, Carson must somehow uncover the truth behind the mirrors – and convince Amy to help him battle the greatest evil he has ever faced.

Check out the trailer for Mirrors below

More about Alexandre Aja
Alexandre Aja is quickly becoming one of his generation’s most accomplished and innovative filmmakers in the horror genre.

The son of French director Alexandre Arcady and French cinema critic Marie-Jo Jouan, Aja began his career as a writer/director of bold and sinister thrillers, including Over the Rainbow, Furia and the international hit slasher film Haute Tension (High Tension).

His American debut, a hyper-stylized remake of The Hills Have Eyes, Wes Craven’s 1977 film about a band of sadistic cannibals that terrorize a vacationing family, further established Aja as a bold new voice in the horror genre.

Film Fetish Trivia: Up next, Aja will write (with Gregory Levasseur) and direct Piranha 3-D, a three-dimensional re-imagining of Joe Dante’s bloody 1978 classic.