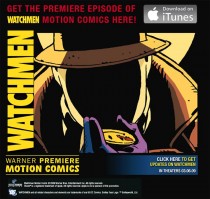 Warner Premiere announced yesterday a new way for graphic novel fans to connect with their favorite characters and the stories they know and love through short-form digital content. Warner Premiere’s Motion Comics draw on a massive amount of source material to bring a visually engaging experience to life through the use of subtle movements, voice-overs, sweeping music scores and stunning comic book artwork. The highly anticipated debut episode of DC Comics’ Watchmen is now available exclusively as a free iTunes download for the next two weeks via Entertainment Weekly’s website at www.ew.com/watchmen. Beginning August 2, the debut Watchmen Motion Comic will be available on the iTunes Store for purchase and download for $1.99. In addition, the Eisner Award-winning “Batman: Mad Love” starring Batman, The Joker and Harley Quinn can be downloaded to own from Xbox Live and available on Verizon Wireless’ V CAST Video service starting July 22. A full lineup of Warner Premiere’s Motion Comics and release dates will be announced shortly after Comic-Con.

Watchmen – Motion Comic
Watchmen takes viewers through the critically acclaimed DC Comics and Hugo award-winning graphic novel by Alan Moore and illustrated by Dave Gibbons. Set in 1985 at the height of the cold war between the United States and the Soviet Union, costumed avengers have been banned with the exception of two – The Comedian and Rorschach. During this time the mysterious murder of a United States government official named Edward Blake occurs in New York, possibly by Soviet Communists. It is later confirmed that Blake is actually a costumed avenger – The Comedian. The news of the murder is discovered by his fellow costumed avenger, Rorschach, who sets out to discover the murderer.

During his search viewers discover whether Rorschach is really insane or if he’s uncovered a plot to murder super-heroes and, even worse, millions of innocent civilians. On the run from the law, Rorschach reunites with his former teammates in a desperate attempt to save the world and their lives. But what they uncover will shock them to their very core and change the face of the planet. Following two generations of masked superheroes from the close of World War II to the icy shadow of the Cold War comes this groundbreaking comic story — the story of The Watchmen.

In the July 18 edition of Entertainment Weekly fans will find a special link through EW.com that provides access to the episode via iTunes. Additional episodes for purchase will also be made available via iTunes and other distribution partners in the coming months leading to the theatrical release of Watchmen in 2009.

Batman: Mad Love
Batman: Mad Love is taken directly from the pages of the Eisner Award-winning single issue graphic novel by Paul Dini and Bruce Timm. The story revolves around The Joker’s sidekick Harley Quinn who is madly in love with him. She uses crime to demonstrate her love for her “Puddin’” and sets out to commit the ultimate act of love – killing Batman.

Sign up for Comic-Con Updates from Warner Bros.
To get the latest information on Warner Bros. activities during Comic-Con, go to the official WAP portal: getwb.com/comic. Fans can also sign up for text alerts to Warner Bros. Entertainment events, free downloads and more by sending a text message with the word COMIC to 58671. Standard carrier rates may apply.

Warner Premiere is Warner Bros. Entertainment’s new production company focused on the development, production and marketing of feature-length-DVD and short-form digital content for this growing space. Warner Premiere is committed to being at the creative forefront in the evolution of quality product in the direct-to-consumer business, creating material that exemplifies the commitment to story, production and brand equity for which Warner Bros. is known.

DC Comics, which has been in continuous publication for more than 70 years, is the world’s largest English-language publisher of comics and the home of some of the world’s most recognized icons, including Superman, Batman, Wonder Woman and Sandman.