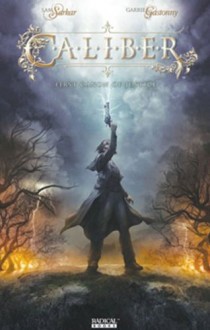 Variety has just reported that John Woo is set to helm the comicbook adaptation Caliber, and the project will be officially unveiled at Comic-Con.

According to the report, the film will likely be a co-production between Johnny Depp’s Infinitum Nihil shingle, Radical Comics and Woo’s Lion Rock.

The original comic was created by Sam Sarkar and Garrie Gastonny (who also co-authored Imaginary for Radical Comics). The story retells the Arthurian legend in the American Northwest, with all of its symbolism, magic, and spirit of adventure. The legend begins with a Indian shaman named Whitefeather, as he discovers a tattooed six-gun imbued with supernatural power. Whitefeather has seen both the signs of the apocalypse and a vision of one who can prevent it. And Caliber, the mystically emblazoned gun, must be fired by only one man, and will never miss.

Woo previously announced he’s directing Lion Rock’s 1949, a period piece set against the Chinese Revolution. That project is now casting and is scheduled to go into production after Woo completes editing work on his epic Red Cliff.

The story indicates Woo is also developing a remake of the 1969 French crime drama The Sicilian Clan, which originally starred Alain Delon (who co-starred in one of my favorite spy films, Scorpio, with Burt Lancaster) and Lino Ventura, and The Divide, about a Chinese laborer working on America’s transcontinental railroad during the 19th century.

Film Fetish Trivia: Lino Ventura, who played in the original Sicilian Clan, played real life crime boss Vito Genovese in the 1972 film The Valachi Papers, starring Charles Bronson. In that film, Bronson plays Joe Valachi, who was one of the first people to break the sacred Mafia code of silence, after Genovese puts out a contract on his life.