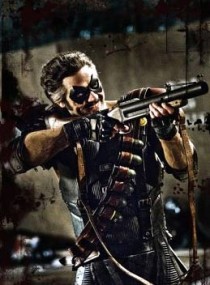 Entertainment Weekly is preparing to invade Comic-Con this year with a fully-loaded arsenal: a three-part series of star-studded panels, a photo and interview studio and an exclusive Comic-Con event co-hosted by SCI FI. In addition, Entertainment Weekly is publishing its inaugural Comic-Con preview package jam-packed with exclusive first looks at highly anticipated TV shows, comic books, video games and movies such as Watchmen, which will be featured on the cover of this special issue. Set in an alternate 1985 America in which costumed superheroes are part of the fabric of everyday society, Watchmen follows the story of Rorschach (played by Jackie Earle Haley) and his investigation into the murder of an ex-superhero. The movie, which will be distributed by Warner Brothers in 2009, is an adaptation of Alan Moore’s comic book series, and stars Haley, Billy Crudup, Jeffrey Dean Morgan, Carla Gugino and Patrick Wilson.

Also new this year is the three-part panel series called “Entertainment Weekly Presents: The Visionaries,” which will bring together some of the best and brightest creators in comics, television and movies to openly discuss the work that’s being done in their respective fields. Footage from each of these panels will be available on EW.com. The first of these panels will be the Comic Creators Visionary panel, moderated by Entertainment Weekly staff editor Nisha Gopalan. It will feature writers and artists who are blazing a path into the future of comics including Jim Lee (All-Star Batman & Robin), John Cassaday (The Astonishing X-Men), Matt Fraction (Casanova), Mike Mignola (Hellboy), Robert Kirkman (The Walking Dead), Colleen Doran (A Distant Soil) and Grant Morrison (Final Crisis). Coming from both the mainstream and the independent worlds, these men and women will provide unique insights into the comics landscape. This panel will take place at 3:30 p.m. on Thursday, July 24.

Next up, Entertainment Weekly’s senior writer and resident Lost expert, Jeffrey “Doc” Jensen, will moderate a TV Showrunners Visionary panel featuring producers who are changing the face of television with deeply immersive entertainment marked by cutting-edge storytelling. They are Carlton Cuse and Damon Lindelof (Lost), Josh Schwartz (Chuck, Gossip Girl), Bryan Fuller (Pushing Daisies) and Josh Friedman (Terminator: The Sarah Connor Chronicles). These showrunners have been at the forefront of bringing “genre programming” or “cult TV” to the mainstream and will have a candid conversation about creative integrity in a commercial medium and the future of broadcast TV in a digital world. Spoiler alert—upcoming plot developments may be teased! The TV Showrunners panel will be at 1:45 p.m. on Friday, July 25.

To close out the series, senior editor Marc Bernardin from Entertainment Weekly and EW.com, will moderate a Filmmakers Visionary panel featuring Kevin Smith (Zack and Miri Make a Porno, Clerks), Frank Miller (The Spirit, Sin City), Zack Snyder (Watchmen, 300) and Judd Apatow (Pineapple Express, The 40-Year-Old Virgin). These filmmakers are redefining what it means to have power in Hollywood because their power is derived from both delivering high-profile entertainment to a hungry mainstream audience and by cultivating a rabid, pseudo-religious fan following. They will engage in a freewheeling conversation on the movie business, their upcoming projects and what it means to them to be a geek. This panel will take place at 5:15 p.m. on Friday, July 25.

On Saturday, July 26, Entertainment Weekly and SCI FI will partner again for the second year in a row to celebrate all things pop culture at Comic-Con 2008 with an exclusive event on the roof deck of Hotel Solamar. Comic book masters, industry insiders and Hollywood elite will enjoy a night of revelry under the stars with great music, food, cocktails and spectacular views of downtown San Diego.

In addition to these events, Entertainment Weekly’s inaugural Comic-Con issue will be packed full of first looks at highly anticipated movies such as Watchmen, Star Trek and Terminator Salvation: The Future Begins, as well as exclusives from more upcoming movies, TV shows, games and comic books including Joss Whedon’s Dollhouse, Chuck, Harry Potter and the Half-Blood Prince, Friday the 13th, The Day the Earth Stood Still, DC Universe Online, Land of the Lost, Fringe, Max Payne, RocknRolla, Drag Me to Hell, The League of Extraordinary Gentlemen (Vol. III): Century, The Spirit and Ender’s Game. 17,000 complimentary copies of this special issue will be handed out to Comic-Con visitors in Warner Brothers’ goody bags and at the Warner Brothers booth in honor of the Watchmen cover. Guests at the Hard Rock Hotel San Diego, Hotel Solamar and The Ivy will also receive copies of EW’s special Comic-Con 2008 issue.