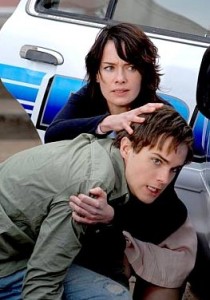 Fan favorite Anchor Bay Entertainment reaches out at the 2008 San Diego Comic Con, taking place July 24th through the 27th at the San Diego Convention Center! Anchor Bay Entertainment will have a major presence at the SDCC – globally acknowledged as the world’s greatest and largest genre convention! There will be a trailer premiere for Laid to Rest, which I’ve been reading about and waiting for.

Laid to Rest follows a young girl who wakes up in a casket with a traumatic head injury and no memory of her identity. She quickly realizes she’s been abducted by a deranged serial killer and in an isolated rural town she must survive the night and outsmart the technologically inclined killer who is hellbent on finishing what he started.

Fans will not only be able to meet and greet with their favorite Anchor Bay Entertainment stars, but also get such exclusive, behind-the-scenes scoops as:

The following Anchor Bay Entertainment-sponsored events will allow fans to meet, greet and talk with their favorite ABE stars and filmmakers!