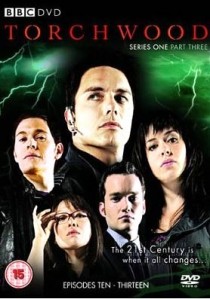 The BBC is coming to Comic-Con 2008 with its first ever BBC America booth plus an army of creators and stars from international hit series Doctor Who, Torchwood, Primeval and Spaced. The booth on the exhibition floor will promote BBC Video, associated merchandise as well as BBC America’s Supernatural Saturdays, the home of Doctor Who, Torchwood and Primeval.

To mark the event, BBC America has launched an exclusive website with up-to-date information on ticket giveaways for signings, live video updates from the floor and exclusive interviews with the stars, at www.bbcamerica.com/comiccon.

Friday, July 27 sees a panel for the clever and edgy comedy Spaced with creator-stars Simon Pegg (Shaun of the Dead, Hot Fuzz), Jessica Hynes (Shaun of the Dead, Son of Rambow), and director Edgar Wright (Shaun of the Dead, Hot Fuzz). The panel will be moderated by Drew ‘Moriarty’ McWeeny, West Coast editor of Ain’t It Cool News.  Created for fanboys and fangirls, Spaced will be available for the first time in North America in a DVD set on July 22 and on sale at the BBC booth. Later that evening, there will be a special screening of three episodes as chosen by the fans, log on to www.spacedinvasion.com to get involved.

The Doctor Who, Torchwood and Primeval panels will be moderated by Los Angeles Times writer Geoff Boucher.  Boucher, who has written about Hollywood and the music industry for a decade for the Times, is also the lead blogger on Hero Complex (www.latimes.com/herocomplex) which has insider coverage of genre films, graphic novels, science fiction and all the other heroic pursuits in pop culture.

BBC America’s booth (#3629) on the exhibition floor will host various signings on Thursday and Friday related to all four programs. Fans will be able to purchase DVD sets from BBC Video and merchandise from a range of licensees – see booth numbers below.

12:00-1:00pm Doctor Who: Executive Producer and lead writer Steven Moffat (Doctor Who) and Executive Producer Julie Gardner (Torchwood) discuss their creative process and experience on working on the BBC’s Doctor Who – Britain’s most successful sci-fi franchise – with exclusive clips and a Q&A session.  Ballroom 20

1:15-2:00pm Primeval: Join Actor Douglas Henshall to hear firsthand about his leading role in BBC America’s all-new U.S. premiere sci-fi series along with Actors Juliet Aubrey and Karl Theobald.  When evolutionary zoologist Nick Cutter (Henshall) discovers prehistoric creatures alive and well in the present day, the natural world is turned on its head and humanity faces a threat to its very existence.  Followed by a Q&A session. Room 6A

10:15-11.45pm Spaced: To close the day, Simon, Jessica and Edgar are asking fans to pick three episodes for a special Comic-Con screening event in Room 6A.  Log on now to spacedinvasion.com to cast your vote.