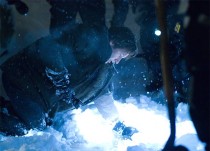 They’ve long wanted to believe, and now the truth – and a new The X-Files movie – is finally out there for the legions of fans eagerly awaiting the debut of the next feature film based on the legendary television series. To honor these “X-Philes” (as the enthusiasts are known), Twentieth Century Fox is hosting a Fan Celebration at the world premiere screening of The X-Files: I Want to Believe on July 23 at Grauman’s Chinese Theatre.

The studio is inviting X-Philes to gather that day in specially-built seating in front of the Hollywood landmark where they can observe the red-carpet arrivals – and participate in a special conference with the film’s stars David Duchovny and Gillian Anderson, plus writer-producer-director Chris Carter and writer-producer Frank Spotnitz. Situated on a stage in front of the theater, the four filmmakers will field questions from the fans, prior to fulfilling their more traditional duties with the press. (Seating will be available on a first-come, first-serve basis. Special credentials will be distributed at 4:00 p.m. to the first 500 fans that arrive that day. The festivities will begin at 6:00 p.m.).

X-Philes around the globe will experience the gala event live, via a special internet site from which they can direct questions in real-time to the film’s cast and filmmakers. This worldwide community of fans will also meet over 100 of the series’ co-stars, guest stars, and behind-the-scenes personnel who have already committed to attending the Celebration.

The X-Files: I Want to Believe opens everywhere July 25. In grand The X-Files tradition, its storyline is being kept under wraps, known only to top studio brass and the project’s principal actors and filmmakers. This much can be revealed: The supernatural thriller is a stand-alone story in the tradition of some of the show’s most acclaimed and beloved episodes, and takes the always-complicated relationship between Fox Mulder (Duchovny) and Dana Scully (Anderson) in unexpected directions. Mulder continues his unshakable quest for the truth, and Scully, the passionate, ferociously intelligent physician, remains inextricably tied to Mulder’s pursuits.