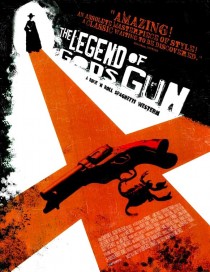 The Legend of God’s Gun is made completely by musicians, according to one of the teaser trailers I watched. The film is already in the video circuit, so some of you may have seen it. The indie grindhouse stars Robert Bones, Kirpatrick Thomas, Dave Koenig, Julie Patterson, Mike Bruce (who also co-wrote and directed the movie), Henry Evans, Scott Dyeswell, Sally Dalton, Samantha Smith and Jarid Southard.

The Legend of God’s Gun follows a gun-slinging preacher who returns to a small town called Playa Diablo seeking revenge from the notorious scorpion-venom drinking bandito El Sobero. Sobero and his band of banditos are also returning to Playa Diablo seeking their own revenge against the town sheriff.

Watch the trailer for Legend of God’s God in the player below.

Watch another teaser, that has background information about the filmmakers RIGHT HERE.

Here’s another look at the film, with a tribal music backdrop.

And here is a trailer for a completely unrelated western called God’s Gun a.k.a. Diamante Lobo from 1976, which just brought back a lot of memories for me as a film junkie. God’s Gun featured gritty screen favorites Lee Van Cleef, Jack Palance, Richard Boone, Sybil Danning, Leif Garrett and Robert Lipton.