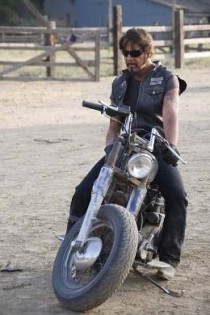 No one knows for sure what’s going to become of Hell Ride yet. I think distributors were more than a little bewildered by the response, or lack-there-of, to the Grindhouse double feature. Take that, along with a sluggish economy, and producers aren’t taking many financial risks with movie releases these days…Plus the film isn’t exactly getting glowing reviews, which doesn’t help issues.

That said, Hell Ride still looks like fun. The story deals with the characters Pistolero (played by the writer/director Larry Bishop), the Gent (Michael Madsen) and Comanche (Eric Balfour) and some deadly, unfinished business among them.

Here is the Sundance Film Fest Q and A, with Quentin Tarantino, .