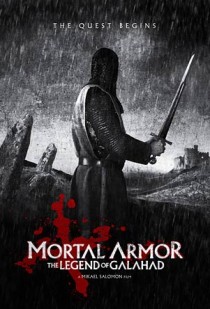 Seven Arts Pictures announced the acquisition of the worldwide rights to the Arthurian historical epic adventure “Mortal Armor: The Legend of Galahad.”

The film, which is in pre-production, follows the epic journey of young Galahad in his quest of finding the Holy Grail that a dying King Arthur believed might save the war ravaged Kingdom from destruction. But as the story unfolds, his quest leads him down unexpected paths as he finds his first love, meets his long lost father Lancelot, and seeks to prove himself a knight.

Mikael Salomon is set to direct the feature. Most recently Salomon directed the upcoming mini-series “The Andromeda Strain,” as well as the critically acclaimed mini-series “The Company,” for which he was nominated for an Emmy and a Directors Guild Award. Salomon received an Emmy Award for his directing on HBO’s “Band of Brothers,” produced by Tom Hanks and Steven Spielberg, and was nominated for an Academy Award for Best Visual Effects on “Backdraft.”

Gale Anne Hurd of Valhalla Motion Pictures is the producer of the film. Hurd recently produced “The Incredible Hulk” for Marvel Studios, as well as more than two dozen feature films throughout her career including “The Terminator,” “Aliens,” “Armageddon,” “Aeon Flux,” “The Punisher,” “The Hulk,” “Terminator 2: Judgment Day” and “Terminator 3: Rise of the Machines,” among others.

The writer of “Mortal Armor: The Legend of Galahad” is Joel Gross, writer of “Marie Antoinette: The Color of Flesh,” “The Books of Rachel,” “No Escape,” and “Blind Man’s Bluff.”

“We are pleased to announce that Seven Arts Pictures has secured the rights to the historical epic adventure ‘Mortal Armor: The Legend of Galahad,’ the newest must-have film from Mikael Salomon and highly respected producer Gale Anne Hurd,” said company Founder and Chairman Peter Hoffman. “It is a strong film that will be supported with an equally strong team.” “Buyers can expect more exciting news shortly as we begin to attach talent to the project,” added COO Kate Hoffman. “’Mortal Armour: The Legend of Galahad’ is an original story that revolves around a time period and legend that remains a favorite among audiences worldwide.”

For nearly a decade, Seven Arts has remained a prominent full service independent producer and distributor of quality feature films. Under the experienced hand of Founder and Chairman Peter Hoffman, the company has distinguished itself as a consistent source for both art house quality films that boast “festival cache,” as well as highly-marketable big budget feature films that appeal to a worldwide audience.

Seven Arts Pictures was founded in 2002 as an independent motion picture production and distribution company engaged in the development, acquisition, financing, production, and licensing of theatrical motion pictures for exhibition in domestic and foreign theatrical markets, and for subsequent worldwide release in other forms of media, including home video and pay and free television.