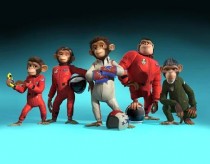 Space Chimps follows a crew of NASA chimps and their adventures in space, as they attempt to save the peaceful inhabitants of a distant planet from an evil dictator named Zartog.

Starz Media and Fox have released a pretty cool online game based on the film, and you can play it right here at Film Fetish. CLICK HERE to play the Flash-based game.