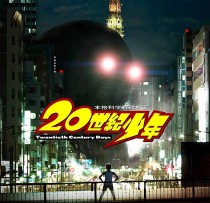 The first trailer for The first trailer for 20th Century Boys, based on the mange series by Naoki Urasawa, is online. The film is the first in a planned trilogy, that will be shot in seven countries, including China, Thailand, the U.K., Japan and the U.S. The first film revolves around a “Book of Revelations” written by the main character in the Manga series, named Kenji, who dreamed of a hero who would stand up to an evil organization bent on destroying the world, during the era of rapid economic development in Japan.