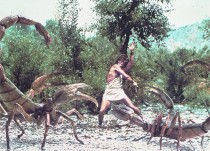 Variety just reported that two Greek mythology epics will soon be dueling for box office. The battle started when Relativity Media inked a deal for a film called War of Gods, a spec script by Charley and Vlas Parlapanides, which will be directed by Tarsem Singh, the prolific video director, who helmed The Cell and last year’s The Fall.

Apparently Warner’s, which initially showed interest in Tarsem’s project, dropped it when the suits signed Louis Letterier, fresh off of his success with The Incredible Hulk, to direct its Lawrence Kasdan (he wrote The Empire Strikes Back, The Big Chill, Raiders of the Lost Ark)-penned remake of Clash of the Titans. Both films are expected to use the green screen techniques used on Warner Brother’s 300 movie.

War of Gods is described as a mythological tale set in war-torn Ancient Greece, as the young warrior prince Theseus leads his men to battle against evil that will see the gods fighting alongside soldiers against demons and titans.

The original 1981 Clash of the Titans starred Harry Hamlin as Perseus and Laurence Olivier as Zeus, and featured Ray Harryhausen’s amazing visual effects which brought to life Medusa, the Kraken among other mythic creatures. The new version, which has been under development for some time, is expected to hit theaters in 2010. Stephen Norrington (Blade, The League of Extraordinary Gentlemen) was the latest director attached to helm the project. My guess is, many, many fans of the original, considered a film classic by yours truly, are breathing a sigh of relief right now. I thought Blade was really good, but Norrington fell off a fuckin’ cliff with The League.

Film Fetish Trivia: Tarsem is also attached to direct The Unforgettable, a sci-fi horror that follows a cop after a serial killer in an attempt clear his name, who finds out he may be connected to the murders after all.