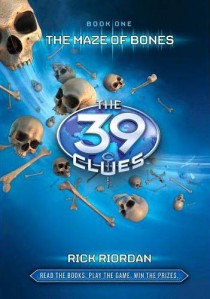 According to Variety, DreamWorks has nabbed movie rights to a new type of adventure series coming from Scholastic call The 39 Clues. The deal includes a multi-film deal with Steven Spielberg possibly helming at least the first one.

The 39 Clues, which launches September 9, 2008, is a 10 book series to be released over two years. It’s being described as a multimedia adventure that includes a set of 350 collectible trading cards and an online game that will serve as a portal for young readers trying to solve a mystery for $100,000 in prizes. I’m in.

The story apparently revolves around the most powerful family in the world, the Cahills, who count Napoleon and Houdini among their relatives. Readers will be challenged to discover the source of the family’s power, revealed through 39 clubs that are hidden around the world and scattered throughout history.

First book, The Maze of Bones, has been completed by Rick Riordan, who also outlined the series’ 10 book story arc. The adventure kicks off with the death of Cahill clan matriarch Grace, who changes her will at the last moment, giving her descendants the choice between $1 million or a clue.

There’s more on the book series at the39clues.com.