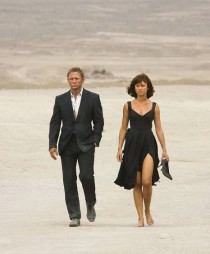 The world’s most well known secret agent and his bevy of babes are even hotter in high definition when six, must-have, classic James Bond films debut worldwide on Blu-ray Disc, (October 21, 2008 in North America and October 20, 2008 in the UK and Internationally), from MGM and Twentieth Century Fox Home Entertainment.

Recently restored and re-mastered for the highest quality picture and sound quality via the state-of-the-art Lowry process digital frame-by-frame restoration and featuring special features galore, Bond is primed for Blu-ray Disc with a selection of 007 adventures spanning the storied career of cinema’s most recognizable spy. Bond titles arriving on Blu-ray Disc, timed to the highly anticipated worldwide theatrical premiere of the 22nd James Bond mission QUANTUM OF SOLACE this November, include DR. NO, DIE ANOTHER DAY, LIVE AND LET DIE, FOR YOUR EYES ONLY, FROM RUSSIA WITH LOVE and THUNDERBALL.

“With QUANTUM OF SOLACE on the horizon, Bond fever is building once again and there is no better time to re-introduce these beloved films featuring the best picture and sound quality available today to the 60 million+ HD-capable households worldwide,” said Eric Doctorow, General Manager Worldwide, MGM Home Entertainment.

Exact worldwide market release dates and title configurations will be announced in the coming weeks.

Blu-ray Disc is the next generation optical disc format developed for high-definition video and high-capacity software applications. A single-layer Blu-ray Disc holds up to 25 gigabytes of data and a dual-layer Blu-ray Disc holds up to 50 gigabytes of data. This greater storage capacity enables the Blu-ray Disc to store over six times the amount of content than is possible with current DVDs, and is particularly well-suited for high definition feature films with extended levels of additional bonus and interactive material. Blu-ray also features the most advanced copy protection, player backward compatibility with the current DVD format, connectivity and advanced interactivity.

MGM and Fox’s commitment to emerging technologies is dedicated to enhancing the consumer experience of its products and providing for backward compatibility with their existing home entertainment libraries while also aggressively protecting its intellectual property from piracy. The Blu-ray companies fully embrace the studios’ steadfast commitment to the fight against piracy and the preservation of the integrity of its properties. Twentieth Century Fox is a member of the Board of Directors of the Blu-ray Disc Association.