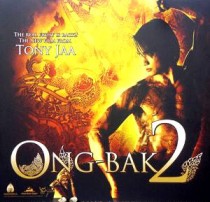 I guess Tom yum goong wasn’t the real Ong Bak 2 after all. Tom yum goong was released in some global territories as Ong Bak 2. But if you watched the film, it clearly wasn’t; not in story or quality. Well Tony Jaa is making his directorial debut with the real Ong Bak 2, and TwitchFilm has posted an amazing promo reel from the movie. I bet the Weinstein’s are already on a plane to close a deal for U.S. distribution, if they haven’t already gotten that contract.

The reel truly looks amazing. It starts off looking like a classic Japanese Samurai flick, with long swords and bloodshed. Then moves on to traditional Chinese kung fu styles and weaponry. Jaa does some amazing techniques with a three-sectional staff, that are eye-widening. Then the ninja arrive.

The film apparently doesn’t have a connection to the first Ong Bak, and in fact is a prequel of sorts. The story follows a young Thai boxer who learns inner meaning of martial arts, after being saved from execution by a group of global fighters as a boy, and begins vigorous training in every one of their arts in an attempt to fuse them all into one master form.

Just check out the bad-ass trailer below.